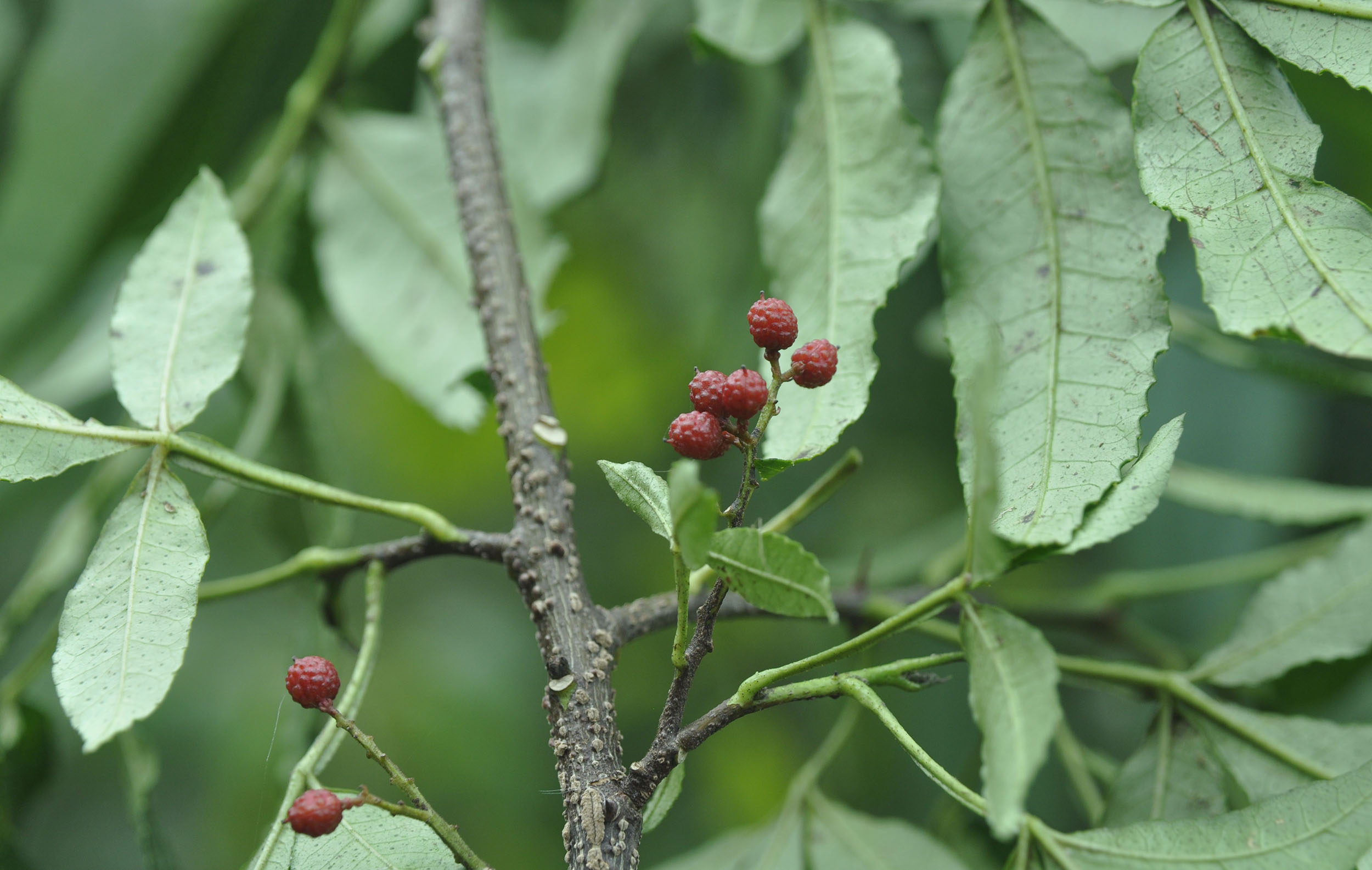 Tumburu is a medicinal plant native to North America. It is a small thorny tree or shrub, up to 6 m high, with dense foliage, and mainly found in the valleys of the Himalayas at an altitude of 1000 to 2100 m, in Khasi hills at 600 to 1800 m, and in the Ghats in peninsular India. Its branches have nearly straight prickles up to 1.2 cm long.

Since ancient times, the plant Zanthoxylum armatum is traditionally used and have been of much interest due to its historical claims as well as anticancer properties. Several other species of this genus have previously shown to have cytotoxicity against various human cancer and tumor cell lines. Hence the cytotoxic activity of the extracts of Zanthoxylum armatum corresponds well with the cytotoxic potential of this genus.

Among different medicinal plants of IHR,
Zanthoxylum (family: Rutaceae) is one of such genus which possess high medicinal, economical as well as ecological impor-tance and have about 250 species spreading all over the world. In India, 11 species of this genus is reported. These are;
Z. budrunga, Z. oxyphyllum, Z. ovalifolium, Z. acanthopodium, Z. planispinum, Z. armatum, Z. nitidium,Z. rhesta, Z. simulans, Z. avicennae
and  Z. limonella
. Out of these, 4 species; Z. armatum DC., Z. acanthopodium DC., Z. oxyphyllum Edgew, and Z. budrunga  are present in Uttarakhand (Kala et al., 2005)

The Latin name of Tumbru or Toothache tree is Zanthoxylum alatum. As the common name of the tree suggests it is used traditionally to get relief from tooth ache. It has numbing effect on teeth, and gums. In Ayurveda, it is used for the skin diseases, loss of smell, heaviness, and pain in head, chronic coryza, and arthritis.

It contains various important, active and useful biochemicals. Its stem bark contain essential oils that have monoterpenes like linalool and limonene and armatamide, an amide. The alcoholic extract of the stem bark have a new flavonoidal glycoside.

-The flowers are used as antidote for snake bite

Z. armatum
contains a number of medicinal properties, so in view of high demand for this plant, the various pharmaceutical companies generally purchase it from the market. In the 2000, the price value in local market (Pithoragarh and Chamoli district in Kumaun region) was 45Rs per kg, in the same year the price in the plains increased from 150 to 200Rs per kg (Kala et al., 2005)

A growing demand of
Z. armatum
has caused a serious reduction in native population as a consequence of over harvesting and deforestation. As a result, target species
has been reported as a “endangered” species as
per International Union for Conservation of Nature (IUCN) criteria (Samant et al., 2007).
Natural regeneration mainly takes place through seeds. Seed germination is the easiest method but in Zanthoxylum, it is not uniform and takes few months to years for germination and establishment of seedling that is, exhibit strong dormancy apparently imposed by seed coat (Bonner, 1974). So propagation through seeds accounts for longer interval

It is known as stimulant, antiparasitic and prevents necrosis. Its powder is used as dust on wound. It is also used in headache.

The Juice of this plant is used for throat disorders, gargling in oral and dental problems.

Prickly Ash is used in many chronic problems such a rheumatism and skin diseases; chilblains, cramp in the leg, varicose veins and varicose ulcers. It is also used for low blood pressure, fever, and inflammation. Externally it may be used as a stimulation liniment for rheumatism and fibrositis. It has a stimulating effect upon the lymphatic system, circulation and mucous membranes.

The powdered bark is applied topically.

Northern prickly ash bark might be safe for most people, but the potential side effects are not known.
There isnt enough information to know if the northern prickly ash berry is safe to use as medicine or what the potential side effects might be.
The toxicities of the preparations – extracts, decoctions and paste are studied by many researchers. The aqueous extracts of dried fruit of Zanthoxylum armatum which are used extensively in traditional herbal remedies exert their toxic potential in vivo by inducing membrane damage of cellular organelles, chromatin condensation, chromatin marginalization, chromosome clumping and nuclear DNA damage resulting in subsequent mitotic arrest

In Unani the fruits, seeds, and bark are used as a carminative, stomachic, and anthelmintic.
Culinary
- In China, India and Pakistan, fruit used as condiment.
- Fruits
Folkloric
- Decoction or infusion of bark and seeds used as an aromatic tonic in fevers, dyspepsia, and cholera.
- Fruit, as well as the branches and thorns, used as a remedy for toothache; also, as carminative and stomachic.
- Elsewhere, used for asthma, bronchitis, cholera, fever, indigestion, toothaches, varicose veins and rheumatism.
- Sino-Annamites use the leaves and fruits as carminative, sudorific, emmenagogue, and astringent..
- In Indian system of medicine, used as stomachic, carminative, and anthelmintic. Fruits and seeds used as aromatic tonic in fever, dyspepsia and cholera.

Zanthoxylum armatum, also called winged prickly ash,is a species of plant in the Rutaceae family. It is an aromatic, deciduous, spiny shrub growing to 3.5 meters in height, endemic to Nepal, China, Japan, Korea and Pakistan.

Common Ayurvedic Formulations of tejasvini with their Indications
Bahushala Guda