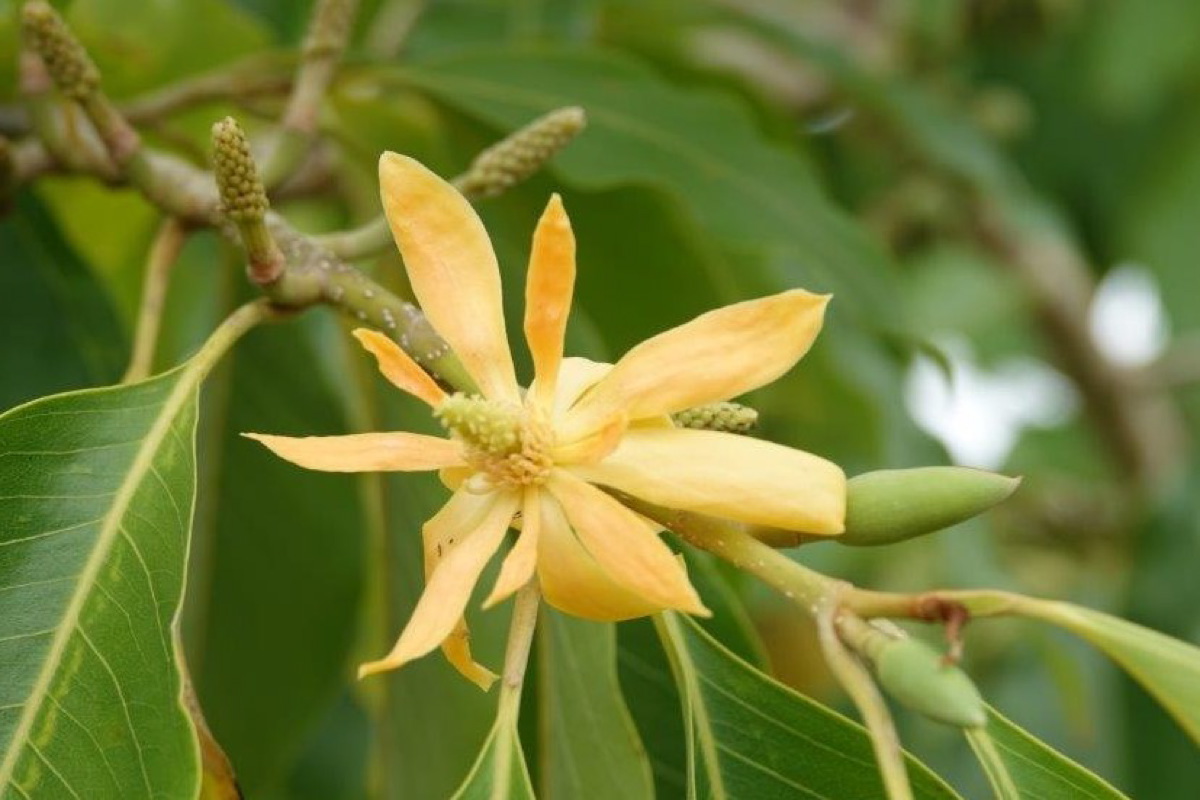 Campaka consists of dried buds and flowers, including calyx, of Michelia champaca Linn. (Fam. Magnoliaceae), a tall, ever green tree, usually upto 30 m in height and 3.5 m in girth with a straight trunk, found in eastern Himalayas, North-East India and Western Ghats; it is planted throughout India in gardens and near temples.

Puranic Reference
The fragrance of Champaka flowers is unique. It is used in the worship of all gods except Lord Shiva. The reason for not using the flowers in the worship of Lord Shiva is as follows:
Sage Narada was on his way to the Shiva temple in Gokarna, in Karnataka, when he was drawn to the smell of Champaka flowers near the temple. He stood below the tree and was enjoying the sweet fragrance of the flowers. He then saw a Brahmin priest nearby the Champka tree.  He had come to pluck the flowers, but on seeing Narada, refrained from plucking the flowers. When Sage Narada enquired with the Brahmin, he told that he was from a nearby village and while he was passing by, he was drawn to the tree by its smell and was thus enjoying the smell of the flowers. Sage Narada then left for the temple. When Narada had left, the Brahmin plucked the flowers and hid in a basket. When sage Narada returned from the temple, he met the Brahmin again.  When Narada enquired with him, he said that he was going home. Narada became suspicious about the Brahmin’s behaviour and asked the Champaka tree if anyone had plucked the flowers, to which the tree replied in negative. Not convinced with the answer, sage Narada went back to the temple and was astonished to find the Shiva Linga covered with Champaka flowers. Sage Narada asked a man who was sitting nearby, as to who had offered the Champaka flowers to the Lord. The man said that a Brahmin offers the flowers daily to the Lord. Lord Shiva was immensely pleased with the Brahmin and had showered him with His blessings. The Brahmin had become all powerful in the King’s court and was harassing poor people.
Sage Narada, asked Lord Shiva as to why he was helping the evil Brahmin. Shiva said that as the Champaka flowers are dear to Him, he cannot but help the evil Brahmin who was worshipping Him every day with the Champaka flowers.
Sage Narada then went back to the tree and cursed the tree for lying. He said that its flowers would never be used in the worship of Lord Shiva. He also cursed the Brahmin saying that he would be born as a demon and will attain moksha when he gets killed in the hands of Lord Rama.
In Bhagavada Purana, (3:21), it is mentioned that next to the Bindu Sarovar Lake, Sage Kardama performed austerities. It is described that the lake was surrounded by fragrant, and spiritually elevating trees and flowers, among which is Champaka mentioned.
It is mentioned in Shiva Purana, that Mount Kailash, was surrounded by fragrant trees, and Champaka was one among the trees.
It is mentioned in Bhagavatam, that the Vrajas of Vrindavan would talk to the Champaka trees, asking them if they had seen their beloved Lord- Sri Krishna pass by.

So notable are its qualities as an ornamental flowering tree that little effort has been made to cultivate closely allied species from Mexico, Central and South America. One of these, Magnolia tamaulipana of northeastern Mexico, is finally gaining some popularity, mostly as an oddity, since its flower fragrance is entirely different from the sweet lemony aroma of M. grandiflora.

Champaka tree rich in medicinal properties is used in several ayurvedic preparations. The leaves, root, root bark, flowers, fruit and oil are used for its medicinal value. The extract of the flowers, leaves and seeds have anti cancer, antimicrobial, antioxidant properties. The active constituents of the plant are alkaloids, saponins, tannins, sterols, flavonoids and triterpenoids.

The tree is cultivated for its flowers and ornamental use
Cultivate soil before planting. Dig hold twice the width of container. Place the plant in hole so the soil level of the plant is the same as the surrounding soil. Fill hole firmly and water well, even if the soil is moist

The tree is grown from stem propagation and seeds.

-Harvest seeds from the ripened fruit of an existing Michelia champaca tree. Allow the fruit to split on its own before removing the seeds.

Magnolia champaca is cultivated by specialty plant nurseries as an ornamental plant, for its form as an ornamental tree, as a dense screening hedge, and for its fragrant flowers. It is planted in the ground in tropical and in subtropical climate gardens, such as in coastal Southern and Central California.

The tree is native to the Indomalaya ecozone, consisting of South Asia, Southeast Asia−Indochina, and southern China.
It is found in Tropical and subtropical moist broadleaf forests ecoregions, at elevations of 200–1,600 metres (660–5,250 ft). It is native to Maldives, Bangladesh, China, India, Indonesia, Malaysia, Myanmar, Nepal, Thailand, and Vietnam In China it is native to southern Xizang and southern and southwestern Yunnan Provinces.

The fragrant flowers attract butterflies and hummingbirds. Its aril-covered seeds are highly attractive to birds.

It is planted in containers in cooler temperate climates. It requires full sun and regular watering.
Provide adequate water in dry periods. Pruning is seldom needed

Bark is used in fevers, flowers are stimulant, good for eyes and relives burning , and in skin diseases, Root bark is purgative, used in amenorrhoea. Flowers tonic, stomachic, carminative, used in dyspepsia, nausea, fever, also useful as a diuretic in renal diseases. Flower oil used in cephalgia. Bark stimulant, diuretic and febrifuge. Dried root and root-bark used as a purgative and emmenagogue

Michelia champaca is an evergreen or semi-deciduous, small to mediumsized tree up to 50 m tall
Flowers are white, elongated, bell-shaped, with thin, leathery, and narrow petals, emitting a strong sweet fragrance.
Cultivated for its flowers and used for making floral necklaces or the perfuming of clothes in storage. Also used to scent hair oils.
Studies have shown antibacterial, antifungal, antioxidant, tyrosinase inhibiting, anti-asthmatic, cytotoxic properties.
The genus is named after Italian botanist Peter A. Michel (1679-1737); the
specific epithet after the Hindu name
KEY WORDS: Magnolia champaca, champak, Michelia champaca.