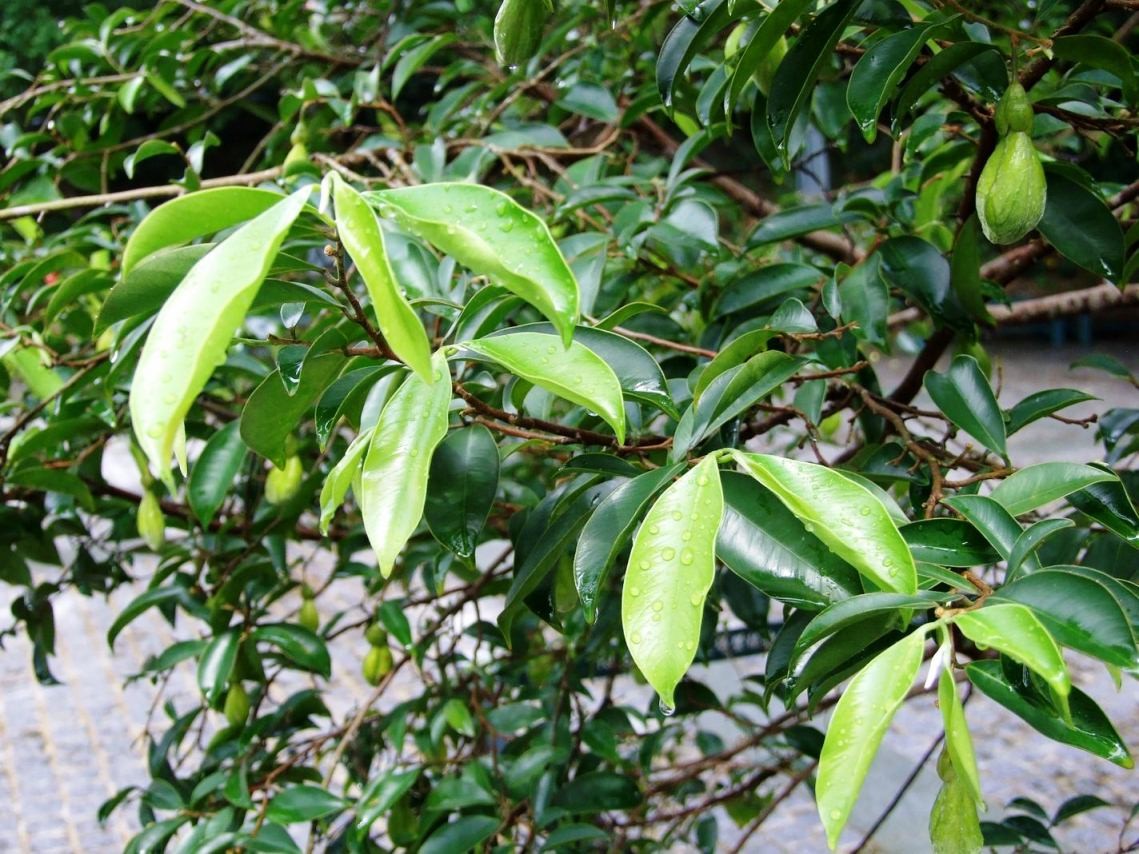 Aromatics and spices have been a conspicuous element in many cultures and life practices for centuries (turner 2004) and their rarity, and inaccessibility, often gave them a noble or mystical status. Aromatics and spices have been synonymous with wealth, exclusivity, and luxury, although elites could justify their use as necessary owing to their religious, funerary, medical, and culinary importance ( Cobb  2013). Frankincense and myrrh are well known examples of fragrant resin highly demanded and valued by the people of ancient Egypt, Mesopotamia, Greece, Rome, China, and India (Groom 1981). The earliest recorded use of plant aromatics is found in the four Vedas of ancient India. The spiritual significance of aromatic plants was highlighted in these ancient texts and was often referred to as the "spirit of life".

Aquilaria malaccenes - It is a species of plant in the Thymelaeaceae family. It is found in Bangladesh, Bhutan, India, Indonesia, Laos, Malaysia, Myanmar, the Philippines, Singapore, and Thailand. It is threatened by habitat loss.


Agar wood is known under many names in different cultures:
- Another name is Lingnum aloes or Aloeswood , unrelated to the familiar genus, Aloe. Also called aghil, via Hebrew and Greek
- In Assamese it is called as "sasi" or "sashi"
- In Bengali, agarwood is known as "agor/agoro gach
- In Cambodia it is called"chann crassna " The fragrance from the wood is called "khloem chann"
- In Hindi it is known as agar, which is derived originally from the Sanskrit aguru
- In Sinhala agarwood producing Gyrinops walla tree is known as" Walla patta"
- In Tamil it is called "akil"though what was referred in ancient Tamil literature could well be Excoecaria agallocha.
- In Telugu and Kannada, it is known by the same Sanskrit name as Agaru.
- In Europe it was referred to as Lignum aguila or Agilawood, from similarity to Tamil- Malayalam aghil, deriving from Sanskrit agaru
Rasa: Katu Tikta
Guna: Laghu Teeskhsna
Veerya: Ushna
Vipaka: Katu
Prabhava: Medhya
Karma: Kaphahara Krimighna Kushtagna-useful in skin diseases, Vatahara Vathakaphahara


The bark of agaru exhibits a pleasant aroma and thus finds a place in the groups of medicines used for fumigation type of treatment used in condition of non healing skin ulcers exuding discharges to dessicate the surface of the ulcers.
Part used in Agaru is aromatic resinous wood, its oil also used called Agarwood oil
Its a main ingredient in Anu tailam a very famous ayurvedic oil used as nasal drops to treat ear,nose and troat related disorders . It is also an ingredient in Arimedadi tailam  Used for oil pulling or gargling. it helps to improve strength of teeth and sence organs
It is also used as ayurvedic herbal smoking

The natural production of agarwood takes many decades to develop,and when it does form it is usually found in a very small percentage of tree. Over the past years, many techniques have been tried to induce agarwood. A traditional way  used by some farmer sis to cause  repeated wounding of trees. This method may produce a very small amount of law quality agarwood at times or may be unsuccessful. Another method used in Bangladesh is to apply nails into the tree often with hundreds or even thousands of nails put into each tree. This process is extremely labor intensive and takes a great deal of time to carryout. After many years, each nail wound produces a slight amount of low quality resinous wood and if all of the resin around these nail wounds is collected, the amount can be used for oil extraction.
A long term investigation of how Aquilaria produces resin in natural forests by the author colleagues at the university of Minnesota and the Rain forest project foundation has provided valuable information on the biological processes involved and the management systems needed for high quality resin production.Field trials over many years using methods that mimic the natural production of agarwood have shown great success and are now being used to produce high quality agarwoodin young plantation grown trees in many areas of the Indomalaya region. In addition the production of agarwood is not limited or restricted to just a few trees but can be formed in all trees that are treated. The whole tree can produce resin and it can be found from the base of the tree up into the small branches using this new agarwood inducement technology. Since the methods used and treatments applied require significant expertise to carry out, kits have been developed that can be applied by professionally trained people. Proper managment of the trees is also required as the resinous wood is formed in the tree. Although the procedures may be difficult for individual farmers to apply, cooperatives or agroforestry industry with trained staff can fecilitate the application of the technology and carry out the work easily. This technology has proven record of success and has been used in aquilaria plantations located in Vietnam over many years. The same methods can be used in Mazoram or other states of India, Bangladesh and other hill countries

Agar plant prefers high humid, sub tropical climate with rainfall 1800-3500 mm per annum. It grows from sea level up to 500-m attitudes. It is a sun-loving plant and requires lot of sunshine.
Agar is propagated by seeds, which are available seed is epigeal, therefore, special care should be taken in nursery management. They are first germinated in sand beds and then transferred to poly bags. Seed has short viability period(7-10 days).

The physical age, growth rates and/ or wood volume or physiological maturity do not govern the harvesting age of agar tree for commercial purpose. It is the infected tree and whose further growth is arrested due to physiological imbalance is harvested and yields agarwood and oil.
Generally, the bad and deformed trees attain harvestable first unlike other forest species. The healthy tree are left to undergo stresses or subject to infection either naturally or artificially to induce oil formation. The harvesting is done on selection and continues for a longer period from a plantation raised at the same time.

Pharmacological activities and medicinal properties as a folk medicine to treat several disease like inflammation, arthritis, vomiting,cardiac disorders, cough,asthma,leprosy,anorexia,headache and gout.The plant has been reported to possess several pharmacological activities such as
antinociceptive, antimicrobial, laxative, anti-oxidant, sedative,antihyperglycaemic, thrombolytic, anti diabetic, ulcer protective, anti cancerous, antidiarrhoeal, hepatoprotective and CNS activities. Every portion of the plant has beneficial properties that can serve the mankind. The entire plant can be extensively studied for further future prospectives.

There is no need for purification

The study claims importance in the context of some confusion and controversies relating to the authenticity and botanical diagnosis of original Agar wood / Akil, a highly valued wood in trade for its incense and medicinal properties.
Indian drug Agar wood / Akil, a plant drug of controversial identity is taken for investigation. The plant A. malaccensis ie, Agarwood is termed as true Akil ascribed in Siddha text and its uses were narrated . From the ancient literature , Akil is equated to eight different botanical binomials belonging to six families. A wood known as Eagle wood (trade name), Agaru, Akil, Agil is created with several pharmacological properties as per the literature claims, it is also a highly priced incense wood of much popular antiquity .

The valuation of agarwood is approximate Rs 5-6 lakh per kg, in India.In the international market, the price goes up by 2-3 times depending on the market.

Aromatics originating from the resin infused infected wood of the Aquilaria and Gyrinops genera have distinct and valued fragrances. Resin formation occurs as a response to internal injury and/or infections in the stems of the agarwood tree. The incenses and perfumes that are prodused from agarwood have been valued for centuries and used by many cultures for spiritual,opulent, and aphrodisiac purposes. Agarwood is highly revered in the seminal texts of Hinduism, Christianity,Buddhism, and Islam. As early as 1400 B.C.E. agarwood  was described as a fragrant product in Sanskrit texts, and in 65 B.C.E, Dioscorides detailed several medical applications for agarwood.

Agarwood is famous for its role in making of incense sticks for various ceremonies. The wood is also used to make beautiful carvings and sculptures. In many countries of Southeast Asia, the Agarwood beads are made to keep oneself safe from evil spirits and bringing good luck.

Pharmacological activities and medicinal properties as a folk medicine to treat several disease like inflammation, arthritis, vomiting,cardiac disorders, cough,asthma,leprosy,anorexia,headache and gout.The plant has been reported to possess several pharmacological activities such as: antinociceptive, antimicrobial, laxative, anti-oxidant, sedative,antihyperglycaemic, thrombolytic, anti diabetic, ulcer protective, anti cancerous, antidiarrhoeal, hepatoprotective and CNS activities. Every portion of the plant has beneficial properties that can serve the mankind. The entire plant can be extensively studied for further future prospectives.

Agaru is likely safe when used in the recommend dosage. There are no toxicity observed for its uses in patients suffering from any respiratory diseases or digestive ailment. However, it increases heat in the body thats why it is indicated in fever with chills.
Some patients with pitha prakrthi or suffering from increased pitha dosha can have the following side effects:
- Feeling of excess heat in the body.
- Hyperacidity.

Aquilaria agallocha, an important medicinal plant is most costly and precious things on earth and most widely cultivated species of the family Thymeleaceace. Whole plant has been used for human medication. Insight of literature review on this medicinal plant unambiguity elaborate its various traditional uses as anti-asthmatic, anti-inflammatory, anti-diarrhea, aphrodisiac, aromatic, astringent, bitter, cardio tonic, carminative,stimulant and fragrant.

Common Ayurvedic Formulations of agaru with their Indications
Brahma Rasayana
Aparajitha dhooma choornam - It is used for fumigation.