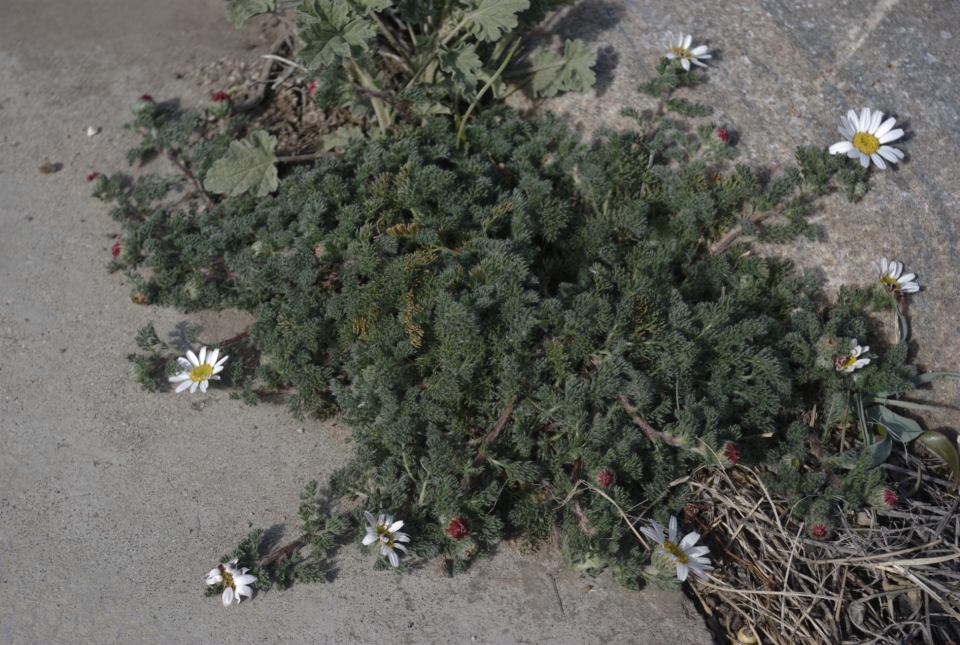 Anacyclus pyrethrum (pellitory, Spanish chamomile, or Mount Atlas daisy or Akarkara) is a perennial herb much like chamomile in habitat and appearance. It is in a different family (Asteraceae) from the plants known as pellitory-of-the-wall (Parietaria officinalis) and spreading pellitory (Parietaria judaica).

This drug is used from thousands of year by Unani physicians, Dioscorides (1st century), Jalinus (131-210 AD), Ibn Sina, Ishaque bin Imran, Abu Marwan bin Zohar (Avenzoar), mentioned this herb in their book. Ainslie, speaking of pellitory root notes that this root is to be found in most of the Indian market; though I cannot learn that plant grew in any part of India and told that it is a native of Arab, Syria, and Bohemia, and it is no doubt from the first mentioned of these countries that it is brought to Hindustan, an export from mocha (Makka) . In Brihatrayees period the drug Aqer Qerha (Anacyclus pyrethrum D.C.) is not to be found in any Vedic period books like, Charaka Samhita, Susrutha Samhita, Astanga Sangraha, but only mentioned by the later writers in Laghutrayees period, such as Sarangdhara and the author of the Bhavaprakasha who have doubtless derived their knowledge of its properties from the Arabs  who in their turn closely follow the Greeks
Sarangdhar, the author of Sarangdhar Samhita has mentioned Akarakarabha in Madhyama Khanda 7th & 10th chapter while mentioning the preparation of Akarakarabhadi churna & Kumaryasava respectively. Bhava Prakash: Author has mentioned this drug in 59th chapter as an ingredient of sapta shali vati. Madhava Nidana has not mentioned about Akarakaraabha anywhere. And later, in Nighantu Period the authors described the synonyms properties & action and indications of the drug in different Nighantu like Haritakyadi Nighantu, Nighantu Ratnakara, Nighantu Adarsha and Priya Nighantu 8. It is considered to be Arab origin, it is mentioned in Arabian Nights under the name Ukhowan, 9 and probably Unani Hakeems brought it to India .
According to Pliny, it was the herb used by the Magians under the name parthenium against intermittent fever, and according to Dioscorides, it is the plant that, under the name of anthemis, was used under the same manner. According to De Candole its introduction into Britain was perhaps before the coming of Romans,  and was used there until this century to promote salivary flow and to relieve toothache.  The European colonies carried it according to Josselyn to Northeast America before 1669 where it is to be found both under and having escaped from that place, as a wild plant . The only difficulty is that pyrethron is described by Dioscorides as an umbelliferous plant, but with properties of pellitory. Hakeem Najmul Ghani correctly notes in his book Khazainul Advia, that the pyrethrum of Dioscorides resembling anethum is a drug which the Arabs call Ud el Kareh Jabli, very common in Syria (Sham), it is found at the upper part of Wady Pardah and he had also seen its fruit, it has a root about a span (angusht) in length, as thick as the finger, and has many of the properties of pyrethrum. He quotes Antaki as mentioning the kind of pyrethrum viz., African and also described by Ibn Baitar, and second is Syrian called Ud el kareh which is the root of Mountain Tarkhun and the kind described by Dioscorides.
Author of Makhzan said that tarkhun is an Arabic form of tukhun, the name of a plant common especially in Faras (Persia) and Shiraz (Iran). There are two kinds of Aqer Qerha wild and cultivated, it is propagated by seed and by cuttings and has a hot temperament, astringent and sweetish taste. If taken in fasting it numb the tongue, on this account it is chewed to cover the tastes of nauseous medicines. The root of the wild plant is called Aqer Qerha  an Arabic name is derived from Aqer and Taqreeh, to mean causing a sore, 12 Selsus mentioned, it’s used for opening the mouth of wounds.  The navigator Vasco da Gama, who had an impacted wisdom tooth, also carried it with him on his epic voyage.  Today it is considered to be the most popular herb of India and Arab.
Galen mentioned this plant to treat brain disorders (amraze ra’as) as masticator and for body spasm (Ikhtelaje badan) Aqer Qerha oil used topically.  Ibn Masvya used it as a gargle with sikanjbeen unsali for the evacuation of morbid matter form uvula and paste of Aqer Qerha in pista oil (roghan habbatul khazra) with another ingredient for the treatment of facial paralysis (laqwa) . Zakaria Razi used it as snuff (saoot) for the treatment of facial paralysis (laqwa), and also mentioned as an ingredient of Majoon Zabeeb for treatment of epilepsy

Akarkara (Anacyclus pyrethrum DC) is a plant used single or in various combinations for multiple purposes in Ayurveda. In Brihatrayee, this plant has not been described. It has been described for the first time in Shodhala Nighantu (Gada Nigraha) by Vaidya Shodhala as Akallaka in 12AD. Later on, Akarkarahas been described in most of the Ayurvedic treatises . This drug has been used by Unani physicians since ancient time. Dioscorides (1st century AD), Jalinus (131-210 AD), Ibne Sina, Ishaque bin Imran, Abu Marwan bin Zohar (Avenzoar), mentioned this herb in their books

Anacyclus pyrethrum (Akarkara) is an aphrodisiac herb in ayurveda that is said to enhance male vitality and virility in addition to being a brain tonic. Evidence is preliminary, but it seems to be a profertility agent and testosterone boosting herb with some neuroprotective effects.
It has a unique property by which it can improve speech problems in growing children. Vacha (Acorus Calamus) is another herb which can be used in its combination with Akarkara (Anacyclus pyrethrum).

Anacyclus pyrethrum is hardy to at least -5°c, probably more if the ground is very well-drainedRequires a well-drained soil in full sun Plants are intolerant of excessive wet, especially in the winter, and will do better if covered by a pane of glass in the winterThe plant is a short-lived perennial in the wild, usually living for 2 - 5 years, though it lives longer in cultivation

Seed - requires about 3 weeks cold stratification. Germination is best at a temperature around 13 - 16°c Prick out the seedlings into individual pots when they are large enough to handle and grow them on in the greenhouse for their first winter. Plant out in late spring or early summeCuttings of softwood in the spring

Akarkara root powder, dosage is variable from 125 mg to as high as 1 g.

It is found in North Africa, elsewhere in the Mediterranean region, in the Himalayas, in North India, and in Arabian countries.

It has been grown on an experimental scale at elevations of 900 m at Katra (Jammu and Kashmir), and Himalayan region from seeds imported from Algeria.

Spanish Pellitory, a slightly aromatic herb, is revered for its pain-relieving properties. The herb is also recommended for the treatment of male sexual weakness or debility.

Most beneficial and useful part of plant is the root which is medicinally used in the form of dried powder.

The herb is mostly known and famous for its aphrodisiac effect on the body and helps in the detoxification of excess wastes and fluids from the body.

Although In large dose the powdered root is an irritant to the mucous membrane of the intestine causing blood stools, tetanus-like spasms and profound stupor , contact dermatitis if handled incorrectly

Akarkara is very safe drug even taken in high doses. A study per OECD guidelines  showed that different root extracts of Akarkara did not cause any apparent toxicity in animal models. No death or signs of toxicity were observed
in rats treated with extracts at dose 2000 mg/kg, establishing its safety.
LD50 value of Akarkara root extracts was found to be more than 2000 mg/kg of body weight. However, detailed experimental analysis of its chronic toxicity is essential for further support of this drug .

Ayurveda and Siddha have uses for this plant root and it has been used for centuries as a medicine. It is believed to act as aphrodisiac for men.

Anacyclus pyrethrum an amazing medicinal plant is one of the most widely growing species of the family Asteraceae. The present review endow with significant information about its phytochemical investigations, pharmacological activities and medicinal properties as a folk medicine to treat several disease like anti-rheumatic, analgesic, antibacterial, antiviral, carminative, anti-catarrh, improve digestion, emmenagogue, febrifuge, nervine, vermifuge, and sialagogue. The plant has been reported several pharmacological actions such as antidiabetic, immunostimulating effect, inhibitory effects, antidepressant activity, anticonvulsant activity, memory-enhancing activity, aphrodisiacs, antimicrobial activity, antioxidant, local anesthetic effect, insecticidal effect, action on COX and LOX, interactions with testosterone, interaction with libido, and it interaction with testicles. Mainly the root portion has beneficial properties that can serve the mankind.