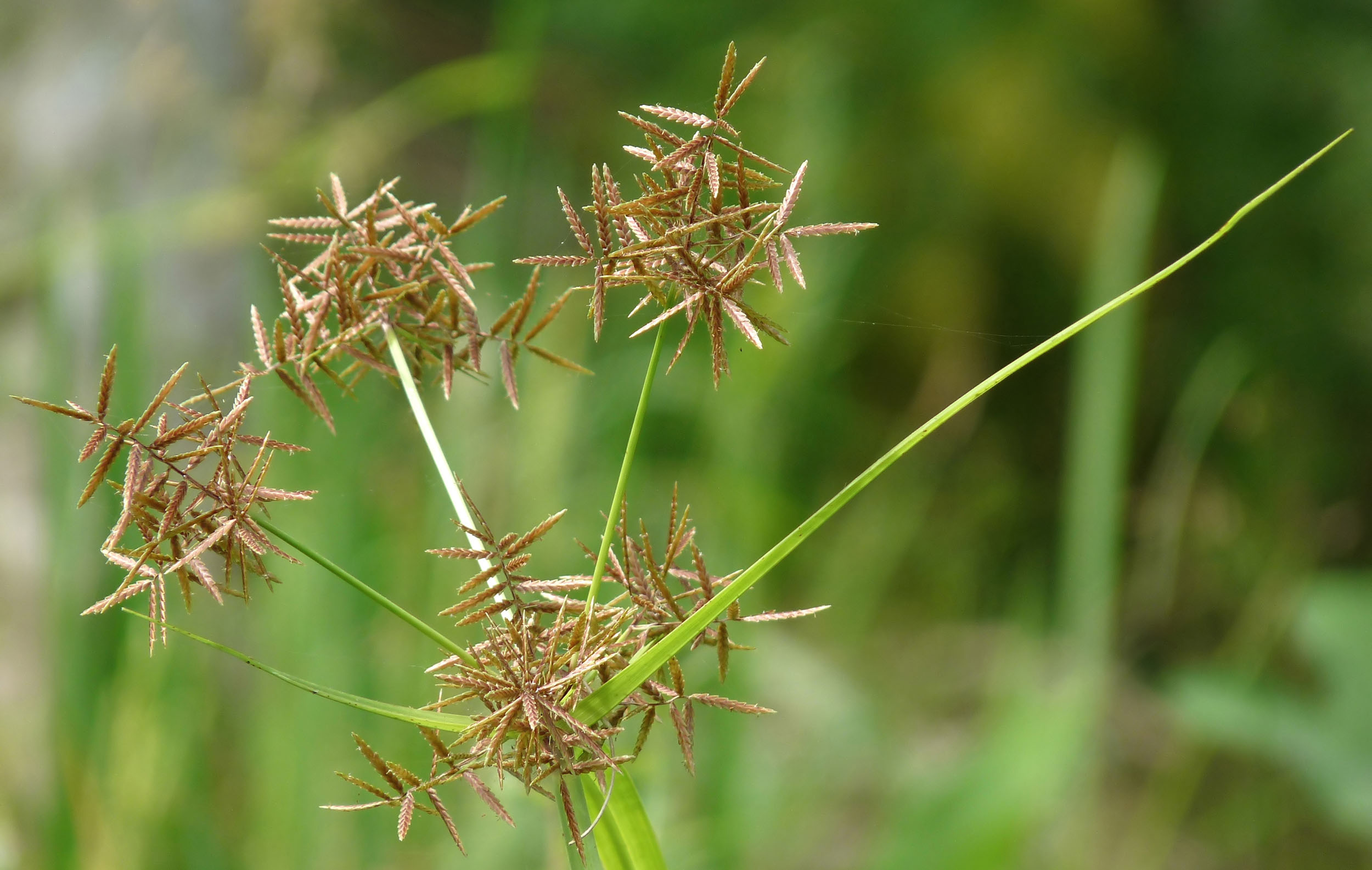 Musta (Cyperus rotundus Linn.) belongs to the family Cyperaceae.
It is perennial herbs, 10-75 cm height.
It is found throughout India up to an elevation of 1800 m., from Kashmir to Simla, Garhwal and Khasia hills, throughout the plains of almost all the states and ascending the mountains of the Central table- land from Mount Abu and Pune to the Nilghiri hills.
It is perennial weed, thrives on all kinds of soils under varying climatic conditions.
Regeneration is mainly through underground rhizomes .

C. rotundus was part of a set of starchy tuberous sedges that may have been eaten by Pliocene hominins. It was a staple of Aboriginal populations in Central Australia.
Biomarkers and microscopic evidence of C. rotundus are present in human dental calculus found at the Al Khiday archaeological complex in central Sudan dating from before 6700 BC to the Meroitic pre-Islamic Kingdom of 300–400 AD. It is suggested that C. rotundus consumption may have contributed to the relatively low frequency of dental caries among the Meroitic population of Al Khiday because of its ability to inhibit Streptococcus mutans
C. rotundus was employed in ancient Egypt, Mycenean Greece, and elsewhere as an aromatic and to purify water. It was used by ancient Greek physicians Theophrastus, Pliny the Elder, and Dioscorides as both medicine and perfume

Cyperus rotundus is one of the most invasive weeds known, having spread out to a worldwide distribution in tropical and temperate regions. It has been called "the worlds worst weed"
The difficulty to control it is a result of its intensive system of underground tubers, and its resistance to most herbicides. It is also one of the few weeds that cannot be stopped with plastic mulch.

Cyperus rotundus mainly reproduces by rhizomes and tubers. Hundreds of tubers can be produced in one season at the tips of the rhizome. Tubers require a chilling period to break dormancy and produce a primary basal bulb 1-2 cm (0.39 - 0.78 inch) beneath the soil surface.

Germination predominantly in spring and summer

-It is used as a reliable antidote for all kinds of poisons.

-There is some controversy regarding its botanical identity largely because early Ayurvedic texts mentioned two varieties "Nagara musta and Bhadra musta" which were later identified respectively as Cyperus scariosus R. Br. and Cyperus rotundus L. (Sastry, 2005). The work of Kaviraj Govind Das Sen of 17-18th centuries entitled "Bhaisajya Ratnavali", states that "Musta ca Ativisha abhave", which literally means that Musta can be used as a substitute of Ativisha (Mishra, 2007). In fact it has been accepted by Ayurveda that Musta is a substitute (Abhava Pratinidhi Dravya) for Ativisha(Venkatasubramanian et al., 2010). However their bioequivalence has not been scientifically validated or published. It was also indicated that the roots of Cryptocoryne spiralis (Retz.) Fischer ex Wydler can be used as a substitute of Ativisha (Anandakumar et al., 1982), although it was recommended to the contrary (Sastry, 2005). Since the annual demand for Ativisha has reached over 200 t with a cost of US$ 73.62/kg, (Ved & Goraya, 2008) markets, especially in south India, substitute Ativisha with known and unknown substitutes and adulterants, which include among others C. scariosus, C. rotundus, and Cryptocoryne spiralis. Hence, it is necessary to study the pharmacognosy of authentic field collections to establish quality standards to distinguish the genuine from substitute/adulterants of Ativisha. It is also necessary to find out the extent of similarity between the genuine and the substituted/adulterated samples, in order to understand the legitimacy behind substitution.

Cyperus rotundus is one of the most invasive weeds known, having spread out to a worldwide distribution in tropical and temperate regions. It has been called "the worlds worst weed"

Drug consists of rhizome and stolon having a number of wiry roots,
stolon 10-20 cm long having a number of rhizomes,
crowded together on the stolons,
rhizomes bluntly conical and vary in size and thickness,
crowned with the remains of stem and leaves forming a scaly covering, dark brown or black externally,
creamish-yellow internally; odour, pleasant

It is extensively distributed due to its ability to adapt wide range of soil types, temperatures, soil pH, altitudes and moisture levels.
This plant grows in small clumps up to 100cm high.
It is the native of India.
Mustaka is found mostly all over the India, also in tropical and subtropical regions of Africa, southern Asia, southern and central Europe.

It is a major weed near cultivated crops and in. It is encouraged by frequent cultivation and grows best in moist fertile soils. It doesnt grow well in the shade. Prevalent in disturbed areas and lawns. Very persistent once established.

Its existence in a field significantly reduces crop yield, both because it is a tough competitor for ground resources, and because it is allelopathic, the roots releasing substances harmful to other plants
status - least concern

Nut grass or musta is great for your digestive and urinary system. It fights metabolic disorders like diabetes and inflammatory conditions like rheumatoid arthritis. It can also help you manage weight and fight obesity. Musta is also being explored for treating epilepsy, Alzheimers disease, and even cancer

1. Antidiarrhoeal activity
2. Antiinflammatory activity
3.Antimicrobial activity
Antibacterial, antifungal and analgesic activities of ethanolic extract of C. rotundus rhizomes were reported
4. Cytotoxic activity
- The essential oil of C. rotundus obtained from the rhizomes by hydro distillation was also tested for cytotoxic activity against human tumor cell lines (U 251 and Hela), and Ehrlich ascites carcinoma cells.
5. Antioxidant activity
6. Antiallergic activity
- Release of histamine and β-hexosaminidase by degranulation during an allergic reaction can be used as a biomarker of allergic response of mast cells.
7. Activity on central nervous system
8. Antiplatelet activity
9. Antiobesity and the antihyperlipidemic activity
10. Insecticidal and plasmodicidal activity

excess use may cause constipation
-It isn’t known if purple nut sedge is safe or what the possible side effects might be.

In traditional Chinese medicine, C. rotundus is considered the primary qi-regulating herb.
The plant is mentioned in the ancient Indian ayurvedic medicine Charaka Samhita (circa 100 AD). Modern ayurvedic medicine uses the plant, known as musta or musta moola churna, for fevers, digestive system disorders, dysmenorrhea, and other maladies.
Arabs of the Levant traditionally use roasted tubers, while they are still hot, or hot ashes from burned tubers, for wounds, bruises, and carbuncles.Western and Islamic herbalists including Dioscorides, Galen, Serapion, Paulus Aegineta, Avicenna, Rhazes, and Charles Alston have described its use as a stomachic, emmenagogue, and deobstruent, and in emollient plasters
The antibacterial properties of the tubers may have helped prevent tooth decay in people who lived in Sudan 2000 years ago. Less than 1% of that local populations teeth had cavities, abscesses, or other signs of tooth decay, though those people were probably farmers (early farmers teeth typically had more tooth decay than those of hunter-gatherers because the high grain content in their diet created a hospitable environment for bacteria that flourish in the human mouth, excreting acids that eat away at the teeth).

Musta (Cyperus rotundus) is considered one of the best Ayurvedic herbs for promoting healthy, regular menstruation. It regulates both pitta and vata in the lower abdomen supporting a comfortable, natural flow. Soothing to the mind, musta helps balance the emotions in the days prior to and during menstruation. It also promotes breast comfort and helps maintain a healthy balance of fluids in the body. Mustas ability to promote lower abdominal comfort also includes the GI tract. Without aggravating pitta, it strengthens digestion, eliminates natural toxins, and supports proper function of the liver. Musta promotes healthy absorption, well-formed stools, and the metabolism of fat. Its cooling and cleansing action also supports healthy skin and helps maintain a normal body temperature.