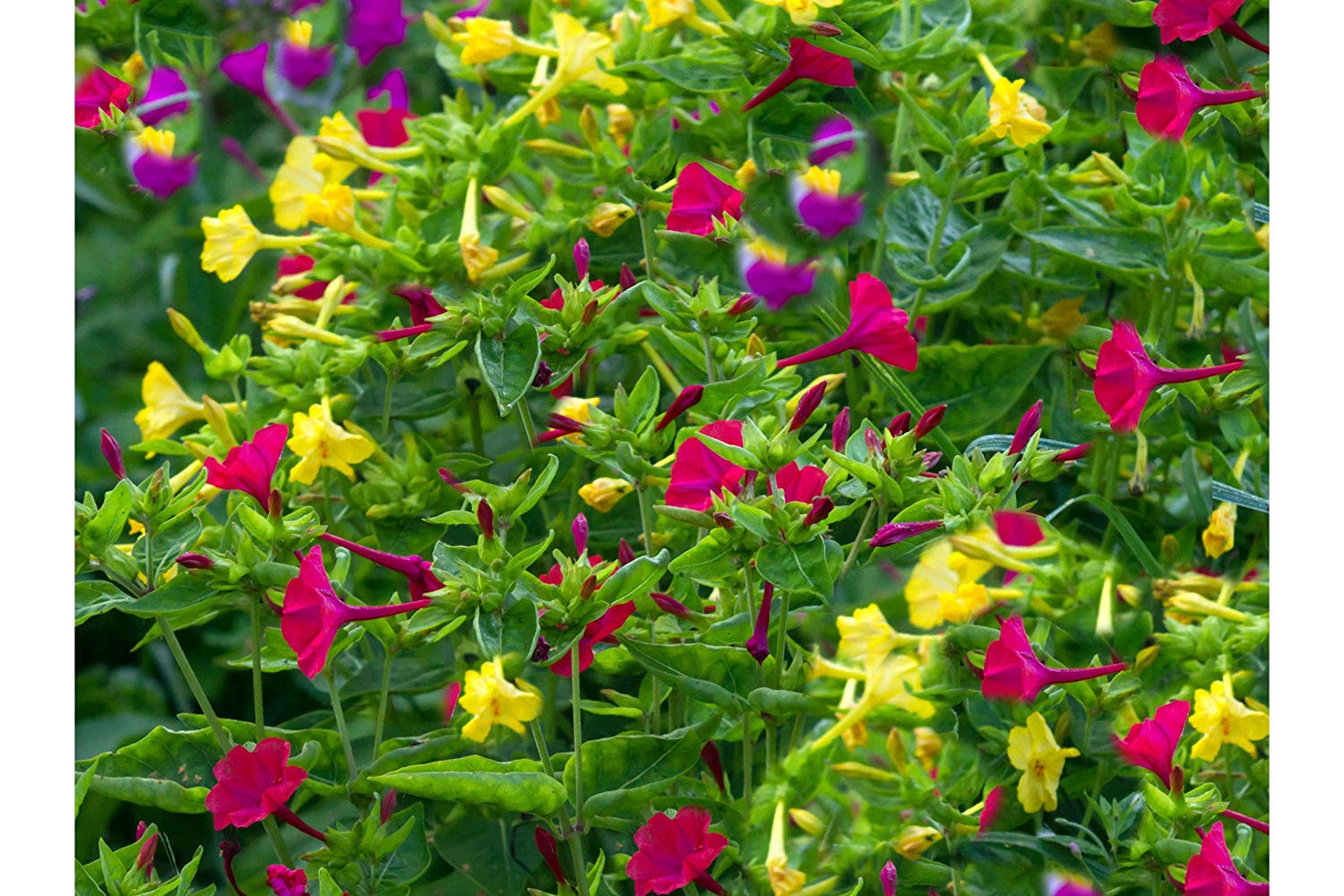 Mirabilis jalapa, the marvel of Peru or four oclock flower, is the most commonly grown ornamental species of Mirabilis plant, and is available in a range of colours. Mirabilis in Latin means wonderful and Jalapa (or Xalapa) is the state capital of Veracruz in México. Mirabilis jalapa was cultivated by the Aztecs for medicinal and ornamental purposes.
The flowers usually open from late afternoon or at dusk (usually between 4 and 6 oclock), giving rise to one of its common names. Flowers then produce a strong, sweet-smelling fragrance throughout the night, then close for good in the morning. New flowers open the following day. It arrived in Europe in 1525. Today, it is common in many tropical regions and is also valued in Europe as a (not hardy) ornamental plant.

The plant does best in full sun. Often in the sun the leaves wither, then return vigorously in the evening, when temperatures start to fall and the sun sets. It can not stand the cold, the aerial part with the first frosts deteriorates and can die, but the underground part that can return to vegetate in spring remains vital. The plant will self-seed, often spreading rapidly if left unchecked in a garden. Some gardeners recommend that the seeds should be soaked before planting, but this is not totally necessary. In North America, the plant perennializes in warm, coastal environments, particularly in USDA zones 7–10. The fragrance of the flower is more intense and noticeable during the warm period of the day. The plant is easy to grow, as long as it is sunny or partially shaded. Under these conditions, it grows very quickly.
It grows preferably in light soil, rich in humus and well draining, it is neutral side acidity (pH). Pot cultivation is always possible with a mixture of 80% soil and 20% garden soil and a very deep container with the tubers being put at a depth of 10 cm. It is usually sown from mid-February to May. The seeds germinate rapidly at a temperature of 18°C.

A bushy plant, it is a perennial herbaceous plant that reaches stature heights of mostly 1, rarely up to 2 meters in height. It may also be grown as an annual, especially in the temperate zone. The single-seeded fruits are spherical, wrinkled and black upon maturity, having started out greenish-yellow. The stems are thick, full, quadrangular with many ramifications and rooting at the nodes. The posture is often prostrate.[4]
A curious aspect of M. jalapa is that flowers with different colors grow simultaneously on the same plant. Additionally, an individual flower can be splashed with different colors. Flower patterns are referred to as sectors (whole sections of flower), flakes (stripes of varying length), and spots. A single flower can be plain yellow, red, magenta, pink, or white, or have a combination of sectors, flakes, and spots.[5][6][7][8][9] Furthermore, different combinations of flowers and patterns can occur on different flowers of the same plant.
Usually, the flowers are found in yellow, pink and white colors but you can find a different combination of flowers growing on the same single four o’clock plant. Another interesting point is a color-changing phenomenon. For example, in the yellow variety, as the plant matures, it can display flowers that gradually change to a dark pink color. Similarly, white flowers can change to light violet. Despite their appearance, the flowers are not formed from petals – rather they are a pigmented modification of the calyx. Similarly, the calyx is an involucre of bracts. The flowers are funnel-shaped and pentalobed, they have no cup (replaced by bracteal leaves) but are made of a corolla.
The inflorescences contain three to seven unpopped flowers. Earning the name "four-clock flower", the fragrant flowers open in the late afternoon or in overcast weather and exhale a scent reminiscent of the tobacco flower, and attract moths for pollination. The anthesis lasts from 16 to 20 hours and thus remains visible part of the day. The flowers are pollinated by long-tongued moths of the family Sphingidae, such as the sphinx moths or hawk moths and other nocturnal pollinators attracted by the fragrance

Mirabilis jalapa hails from tropical South America, but has become naturalized throughout tropical, subtropical and temperate regions. In cooler subtropical and temperate regions, it will die back with the first frosts or as the weather cools, regrowing in the following spring from the tuberous roots. Mirabilis jalapa is native to the dry tropical regions of Central and South America: Guatemala, Mexico, Chile and Peru.
It is currently naturalized in many countries in Asia, Africa, United States, Middle East and, Europe. In Réunion, Mirabilis jalapa was initially an ornamental species; however it become naturalized on the west coast, between 400 and 700 m altitude, and on the south coast between 0 and 700 m. It occurs in a ruderal debris area, and is relatively common in weedy sugarcane fields on the west and south coasts. Its high seed production and rapid growth allow it to cover up to 30% to 50% in cane plots

—Dried root is said to possess some nutrient qualities. Powdered and fried in
ghee with spices it is given in milk as a poushtika. Rubbed with water it is applied as lep in
contusions. Leaves bruised and heated are applied as poultice to boils and abscesses to hasten
suppuration.
Roots are used as purgative in the Philippine Islands