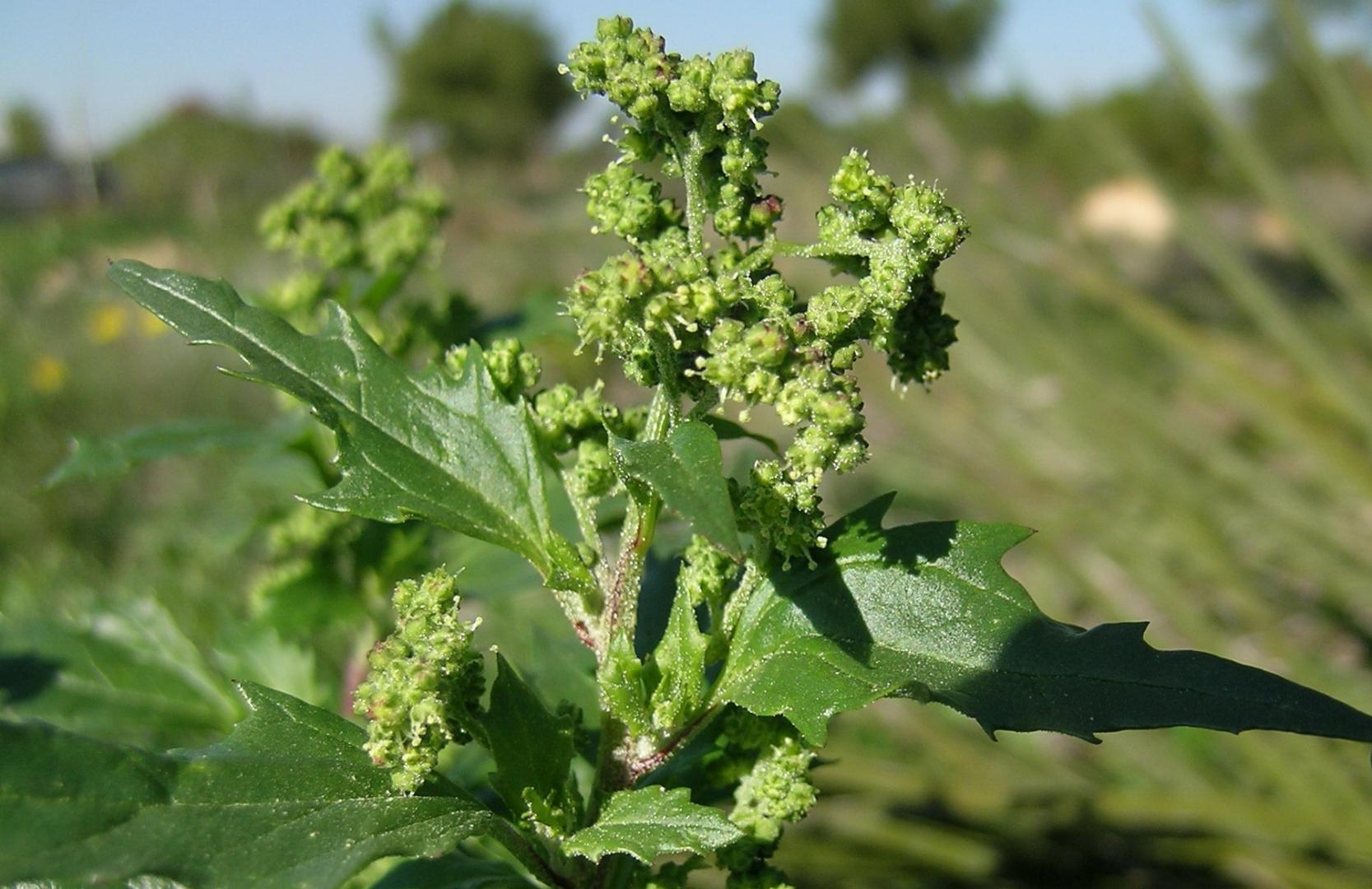 Chenopodium murale is an erect, usually many branched annual growing 30 - 100cm long.The plant is sometimes gathered from the wild for local use as a food.

Certain plant parts of Vāstuka are eaten as a vegetable (śāka), according to Caraka in his Carakasaṃhitā sūtrasthāna (chapter 27), a classical Āyurvedic work. The plant is therefore part of the Śākavarga group of medicinal plants, referring to the “group of vegetables/pot-herbs”. Caraka defined such groups (vargas) based on the dietic value of the plant. Note that Chenopodium murale is a synonym of Chenopodiastrum murale.

Yavaśāka -  because it grows in the fields of barley (and also wheat)
Chenopodium:   chenos = goose, podos = foot
murale:   wall-
Chenopodiastrum:   similar to Chenopodium

It is a common weed of fields and roadsides. The seeds are edible, and the shoots, stalks, and leaves can be eaten as greens   It also states that it is a "pot-herb", which may be utilised in the same manner as spinach.

An easily grown plant, succeeding in most soils but disliking shade. It prefers a moderately fertile soil[

Seed - sow spring in situ. Most of the seed usually germinates within a few days of sowing.

The plant is widely naturalized as a weed in the Americas

The appropriate dose of chenopodium oil depends on several factors such as the users age, health, and several other conditions.

It is an invasive weed found in temperate countries, which grows to a height of 50 cm. The stems are glabrous, greenish and somewhat succulent. Leaves: simple, alternate and without stipules. The petiole is 1.5 cm–5mm long, grooved and covered with microscopic cupshaped scales. The blade is thick, 2.5 cm×3.2 cm–1.8 cm×7 mm, triangular, incised, and covered with microscopic cup-shaped scales.The base of the blade is acuminate, the midrib and secondary nerves are flat above and raised below, and the blade shows 3– 5 pairs of secondary nerves.The inflorescences are axillary or terminal 2 cm long spikes. The flowers are 2mm in diameter and comprise of 5 sepals, 5 stamens and a bifid style. The seeds are very small and black.

Many species of Chenopodium are being used traditionally in indigenous systems of medicine for the treatment of numerous ailments. C. album improves the appetite, acts as anthelmintic, laxative, diuretic and tonic. It is also useful in biliousness, vata and kapha, abdominal pain and eye diseases. It is used in the form of pot herb in piles. The finely powdered leaves are used as a dusting powder about the external genitalia in children

Leaves and young shoots - raw or cooked as a spinach

Pregnancy and breast-feeding: It’s UNSAFE for anyone, especially pregnant or breast-feeding women, to take chenopodium oil. It contains poisonous chemicals.
People with a tendency to rheumatism, arthritis, gout, kidney stones or hyperacidity should take especial caution if including this plant in their diet since it can aggravate their condition

many of the species in this genus contain saponins, though usually in quantities too small to do any harm. Although toxic, saponins are poorly absorbed by the body and most pass straight through without any problem. They are also broken down to a large extent in the cooking process. Saponins are found in many foods, such as some beans. Saponins are much more toxic to some creatures, such as fish, and hunting tribes have traditionally put large quantities of them in streams, lakes etc in order to stupefy or kill the fish[K]. The plants also contain some oxalic acid, which in large quantities can lock up some of the nutrients in the food. However, even considering this, they are very nutritious vegetables in reasonable quantities. Cooking the plants will reduce their content of oxalic acid.

Chenopodiastrum murale (Syn. Chenopodium murale) is a species of plant in the amaranth family known by the common names Nettle-leaved Goosefoot, Australian-spinach, salt-green, and sowbane.This plant is native to Europe and parts of Asia and northern Africa, but it is widespread worldwide, particularly in tropical and subtropical areas due to the ease of it being introduced It is a common weed of fields and roadsides.
KEY WORDS: vastuka Chenopodium murale Linn.