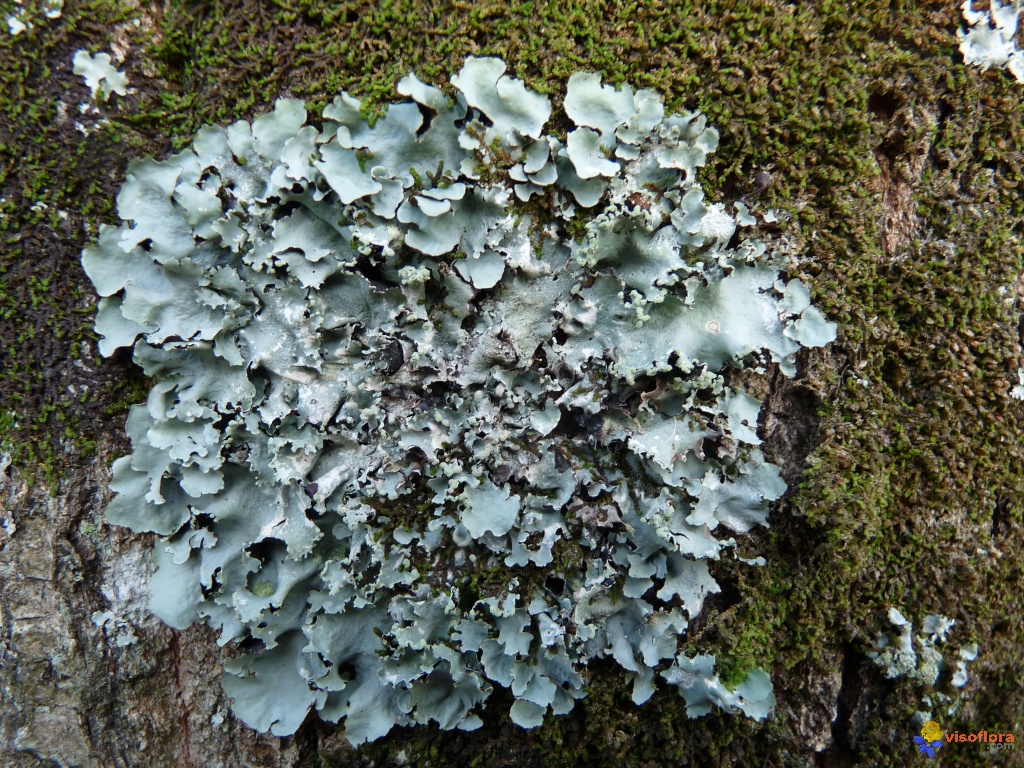 Parmotrema perlatum, commonly known as black stone flower or kalpasi, is a species of lichen used as spice in India. The species occurs throughout the temperateNorthern and Southern Hemispheres. Typically used in meat dishes like nahari (Paaya), Bombay biryani, Goat meat stews, it is also used in vegetarian dishes. It is one of the ingredients in East Indian Bottle Masala, used for cooking Meats, fish and vegetables.

Two lichens are found in all Indian bazars, which are known as the greater and lesser "stone-flowers" in the vernaculars, and in Sanskrit as Sila-valkā or "rock-bark." Similar plants were known to the Greeks as βρυον and σφαγνος, and to the Romans as Muscus. Dioscorides (i., 22) notices of their medicinal properties, Pliny (xii., 61). The Arabs call them Ushnah, a name derived from the Persian, and Hazāz-el-sakhar "rock-scab." Leith says: "It is a thing that spreads on the trees", and it is sweet in odor, and white. " [Kāmūs.] In Persia these lichens are known as Ushnah and Dowālah. The author of the Makhzan el-Adwiya states that Ushnah grows upon the oak, cypress, and other trees; that which is whitest should be preferred; it should have an acceptable odor. He describes it as astringent, resolvent, and aperient, and says that the decoding is used as a tonic and alterative; when burnt, the smoke relieves headache, the powder is a good cephalic snuff. Externally the drug has emollient and astringent properties, and may be used in a bath or as a poultice, & c. The dry powder is applied to wounds and sores to promote granulation. Honigberger mentions the use of the drug at Lahore in disorders of the stomach, dyspepsia, vomiting, pain in the liver or womb, induration of the uterus, amenorrhea, calculi, and nocturnal spermatic discharges.

There are various species of lichens found variable shapes like tubular, upright, branching, and flat and leaf like.

This herbal shrub is invasive and propagates fast. It is mainly grows near the damp areas.
It is widely found in India and other tropical parts of the world where grazing is casual and rains are heavy.

Usnic acid is the key active component of Stone Flowers, which have antimicrobial and antifungal properties.

kala has been accepted as synonym of several other drugs such as saileya, tagara, krishna sariva

though it is seetha veery drug, it is used along with ashta veerya drugs

Parmelia perlata is reported to yield in a spectroscopic studies, a new
lanost-2-en type terpene named parmelanostene and a new labdane type
diterpenoid named permelabdone. It has also to be found to have
antebacterial potential against S.aureus and E.coli bacterial strains,
Tarique Abdullah et. al.,(2007).

Shaileya is a small plant growing in between the rocks, tree trunks and land through out the hilly regions of himalayas and north east india
The upper layer of leaves is green-black and whitish from inside. They also grow on trees gaining nutrition from rain running down the tree.

It is usually a native of Indian subcontinent and found in northern India and Bengal.

In general, Parmelia have a dark lower side with rhizines (rootlets) which attach the lichen to its substrate. The upper side may be several colours - grey, yellow, brown - and may have reproductive organs on it. These may be apothecia (spore producing bodies), isidia or soralia (both vegetative structures). In between these two layers is the medulla which contains the algalcomponent of the lichen.

Stone flower is used as food and medicine. It contains no fat, carbohydrates and protein of 1-5% are present. It is eaten as soup and in salads. It is kapha and pitta suppressant. It is a good pain reliever and also promotes early healing of wounds due to its bitter taste. It helps in treating the skin related problem due to its cold potency. It acts as expectorant, antibiotic and astringent. It helps in avoiding the calculi and it helps in maintaining the normal body temperature. It is also used as anti-fungal and anti-viral agent. It is helpful in relieving from pain when applied on head. It also helps in itching and skin related problems. It helps in reducing any kind of inflammation in the body. It shows antibacterial activity and is fairly effective against Protozoans. Its decoction is given for laryngitis. It helps against boldness, period aches, worms and lice.

Since  the  time  of  the  first  Chinese  and  Egyptian  civilizations, these  have  been  medicinally  used  in  traditional  system  of medicines.  The  literary  records  of  traditional  knowledge  of Indian medicinal  plants  demonstrated  the  lichen  in  Rigveda,  a text  where  the first  authentic  record  of ‘Aushadhi’  (medicine) has  been  described.  Further  the  use  of  lichen  in  folklore  as medicine has been mentioned in different pharmacopoeias of the world

Parmelia  Perlata (Huds.)  Ach.  belonging t o  Parmeliaceae  family  is a  lichen (a  close  symbiotic  association  between  algae and  fungi),  commonly called  ‘Stone  Flower’ and ‘Charila’ in  India.  It i s  widely distributed  in  hilly  areas  of  Indian  subcontinent.  The lichen  was fo und  to  contain  several unique chemical  constituents like  usnic acid, lecaronic acid,  salazinic  acid, atronin etc  and has been  traditionally prescribed  in bronchitis,  excessive salivation,  vomiting,  toothache,  boils,  inflammations  etc.  It  has  also  been  indicated  in  seminal  weakness,  nocturnal  emission,  amenorrhoea, leucorrhoea,  dyspepsia,  calculi, blood  and  heart  diseases,  stomach disorders,  enlarged  spleen,  bleeding  piles, scabies,  leprosy, general  pains  etc.  It tones up the urinary tract and suppresses calculi formation. It has been used as traditional food by Rai and Limbu communit ies of East Nepal  and also as light brown dye for wool as well as bio-indicator of air pollution due to heavy metals. Although it has  already been substantiated for antimicrobial, antiurolithiatic, anticancer, antidiabetic  potentials etc. yet not fully explored for therapeutic effects and thus remained  pharmaceuticall y unexploited. It is probably due to difficulties in identification, bulk collection and lack of updated scientific reports on lichens.
KEY WORDS: shami , Parmelia perlata (Huds.) Ach.