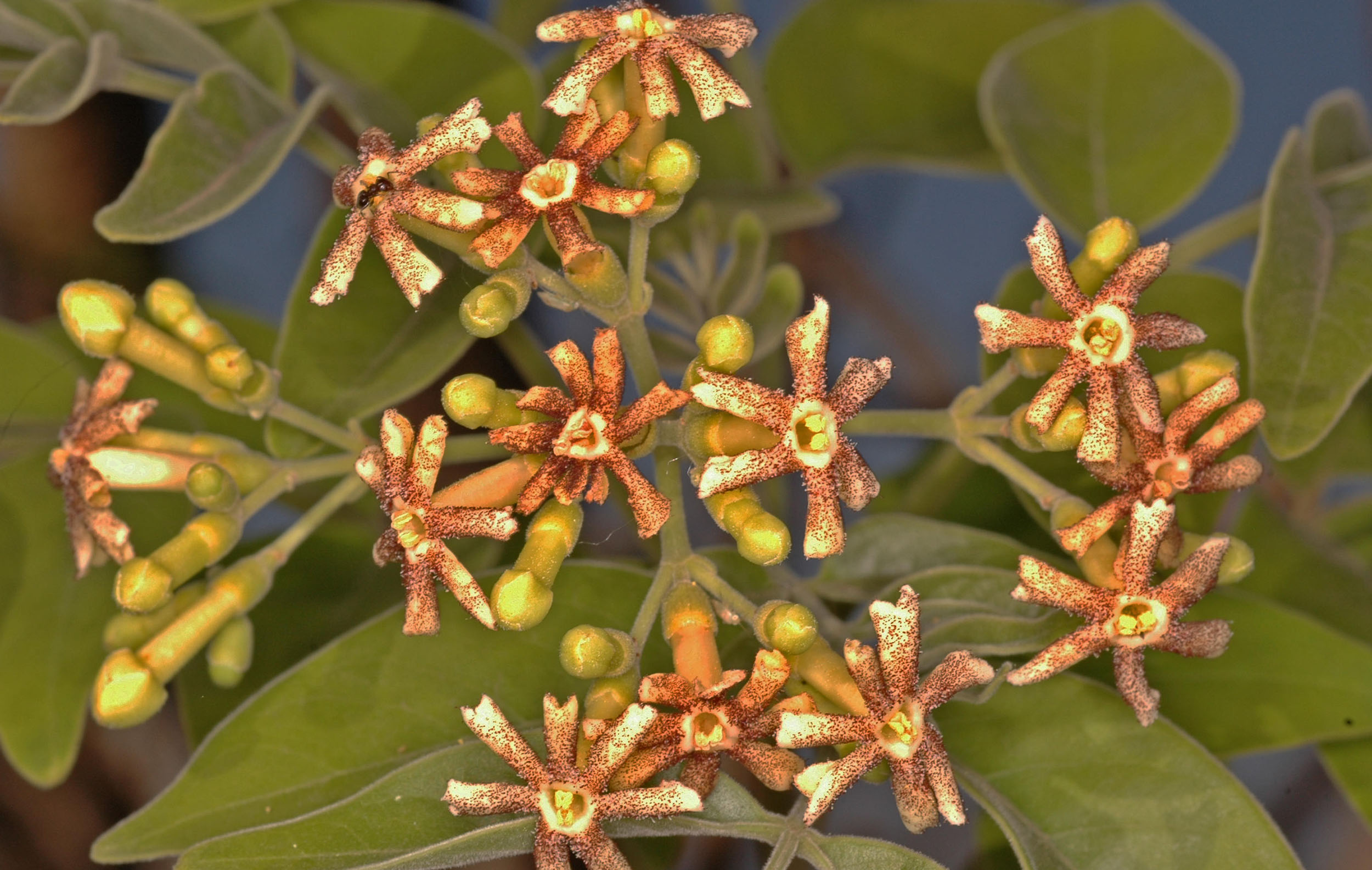 Schrebera swietenioides is a deciduous tree with a large, dense crown; it can grow up to 20 metres tall[
372
,
666
].The plant is hightly valued for its wood, which is much used locally but rarely traded. It is also harvested from the wild for local use as a medicine, and is sometimes cultivated as an ornamental in gardens.

The flowers become very fragrant overnight, when they are pollinated by moths

Seed - sow with the wings pointing upwards in a containers in a lightly shaded position. Stored seed usually germinates within 4 weeks. Prick out the seedlings into individual pots when they are large enough to handle and plant out when large enough

Weavers Beam Tree is a moderate sized deciduous tree, growing up to 20 m tall, with thick grey bark. Leaves are pinnate, with 3-4 pairs of opposite leaflets, and a terminal one. Leaflets are ovate, entire, unequal-sided, petioles thickened at the insertion of leaflets. Flowers are yellowish white, variegated with brown, in terminal trichotomous, corymb-like, compound clusters. Flowers are fragrant at night. Flower tube is funnel- shaped, 8-12 mm long. Petals are 5-7, widely spreading, wedg-shaped, blunt, with brown glandular raised dots on the upper side. Capsule is the size of a hens egg, pear-shaped, woody, hard, scabrous, 2-celled, seeds 4 in each cell, pendulous, irregularly oval, compressed, produced into a long membranous wing. The wood is used by weavers to make the beam of the looms. Flowering: February-April.

The roots, bark and leaves are bitter, acrid, appetising, digestive, thermogenic, stomachic, depurative, constipating urinary astringent and anthelmintic. The fruits are reported to be useful in curing hydrocele

The plant has a long history of being used to treat various diseases. The roots, bark and leaves are bitter, acrid, appetising, digestive, thermogenic, stomachic, depurative, constipating urinary astringent and anthelmintic[
372
]. They are useful in treating a range of conditions including indigestion, skin diseases, leprosy, anaemia, boils and burns and rectal disorders[
1125
].The bark is used to treat diseases of the throat, anaemia, bleeding piles and diabetes[
1125
].The fruits are reported to be useful in curing hydrocele[
372
].The roots are used in the treatment of leprosy[
240
].Scientific investigations have proved the anti-oxidant, anti-inflammatory and antipyretic activities of the root and antidiabetic and antioxidant effect of the fruit[
1125
].The root bark contains some bioactive agents that are powerful antioxidants, which prevent or repair the damage done to the cells by free radicals or highly reactive oxygen species. A significant observation was that the content of polyphenols, flavonoids and tannins was much higher in the root bark compared to the leaves and stem bark. The anti-anaemic property of the plant may be attributed to the presence of the above-mentioned bioactives as they are known to exert anti-oxidant activity as reported in the literature. From our study, it can be established that the anti-anaemic potential of the root bark can be explored for further research in developing a novel herbal delivery system[
1125
].The collective data of this study revealed that root bark has considerable anti-anaemic activity, indicating the use of this plant for the treatment of anaemia[