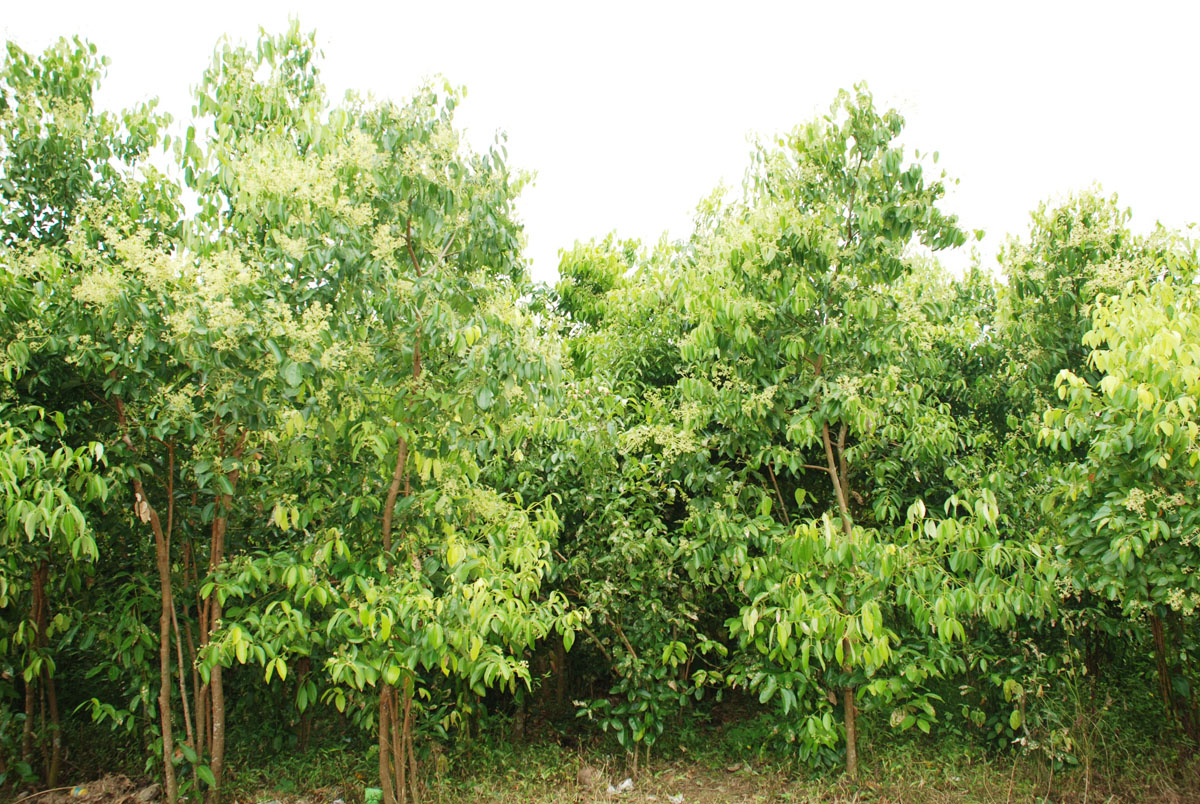 Tvak is the dried inner bark (devoid of cork and cortex) of the coppiced shoots of stem of Cinnamomum zeylanicum Breyn. (Fam. Lauraceae),

a moderate sized evergreen tree usually attaining a height of 6-7 .5 m, cultivated on the Western Ghats and adjoining hills, bark collected during April-July and October-December.

There are a number of fantastic myths created by Middle Eastern traders to conceal the origins of the spice and protect their monopoly of cinnamon trade. One such story included fishing cinnamon with nets at the source of the Nile, while in another, giant cinnamon birds collected cinnamon sticks from unknown lands to build their nests. In reality, the botanical name (Cinnamomum verum, synonym C. zeylanicum) reveals cinnamons intriguing origins and history. The genus cinnamomum derives from the Hebrew and Arabic term amomon, meaning fragrant spice plant.


Twak – Since The bark of the tree is used for medicinal purpose
Bahugandha, Gandhavalka, Utkata – As it has very sharp aroma
Daaru Sita– It gets this name because bark tastes sweet
svadvi -- because of sweet taste
vanapriya - grows wildly in forest
SAIMHALAM - from Sri Lanka
Chocham: Its bark is of very good quality.Vraangam: Every part of cinnamon is admirable and wonderful.Bhringam: It has a hot property.
Rasa: Katu Madhura Tikta
Guna: Laghu Ruksha Teeskhsna
Veerya: Ushna
Vipaka: Katu
Karma: Vathakaphahara

The wonderful aroma that Cinnamon fills up a room with is due to cinnamaldehyde, an indispensable oil found in the bark of cinnamon trees. Known in Hindi as dalchini, in Sanskrit as twak, and in Gujarati as taj,  cinnamon has a long history of use in Ayurvedic home remedies.
Cinnamon bark is one of the common ingredients in spice mixtures used in India. Dalchini is known to increase salivation and to improve digestive functions as recommended by Indian Ayurveda. It also acts as a local antiseptic by virtue of its antibacterial action.

Cinnamon can be found at elevations up to 2,000 metres, but for commercial harvesting does best at low altitudes below 500 metres. It requires a warm and wet climate with an average temperatures of about 27°c and no extremes of heat or cold. Rainfall should be around 2,000 - 2,500mm, well-distributed throughout the year Although there can be months in which there is less rain, no prolonged dry season should occur and rain should be received on about 150 days per yearPrefers a fertile, sandy, moisture-retentive but freely draining soil in full sun or partial shade. Rocky and stony ground is unsuitable. Waterlogged and marshy areas should be avoided, as they result in an undesirable, bitter product, which is much less aromatic. The type of soil has a pronounced effect on bark quality. Fine sandy and lateritic gravelly soils rather than rocky and stony substrates are best in Sri Lanka and India, but in the Seychelles and Madagascar more loamy soils are preferred. Prefers a pH in the range 5.5 - 6.5, tolerating 5 - 7.The tree usually coppices well. Commercial production of cinnamon bark entails cutting the stems down low after an initial establishment period and harvesting the bushy regrowth stems at regular intervals thereafter. Stems are cut during the rainy season to facilitate peeling of the bark in 2 longitudinal strips.

Seed - the seed has a short viability and is best sown as soon as it is ripe. Remove the fruit pulp since this can inhibit germination. Germination can take 1 - 6 months at 20°c. Stored seed should be sown as soon as possible in containers. The seeds may be sown in nurseries or directly in the field. Nursery beds should be of well-prepared rich sandy soil free from roots and stones, with an adequate supply of fresh water nearby, and be lightly shaded. After about 4 months, clumps of seedlings may be transplanted into baskets and are planted out 4 or 5 months later. Alternatively, the seedlings may be left in the nursery until the final transplanting, the shade having been progressively removed and the seedlings hardened.Cuttings of semi-ripe side shoots, 7cm with a heel, June/July in a frame with bottom heat

In Sri Lanka, a first harvest may be obtained after 3 - 4 years, although quality and yield improve with subsequent cuttingsOn plantations, cinnamon is cut every 2 years, and the flush of straight shoots generated by coppicing produces the bark that is peeled for cinnamon quillsThe expected yield of bark is 56 - 67 kg/ha after 3 - 4 years, subsequently increasing to 168 - 224 kg/ha. About 63 kg/ha of chips and approximately 2.5 tonnes/ha of undried leaves can also be obtained

In rare cases, a cinnamon allergy may cause anaphylaxis, a potentially fatal, severe allergic reaction.

Without treatment, it can lead to coma or death.

An anaphylactic reaction may occur in the seconds or minutes after exposure to an allergen. Occasionally, it can take place 30 minutes or more after exposure.

To relieve symptoms of an allergic reaction, a doctor may recommend the use of an antihistamine medication, such as diphenhydramine (Benadryl)

Powdered cinnamon is often grossly adulterated with sugar, ground walnut shells, galanga rhizome and various other substances. Galanga, according to Schmitz-Dumont, may be detected by the presence of small club-shaped, rod-shaped, partly bent, microscopic pieces of resinotannol. (Zeit. oeff. Chem., 1903, No. 2.) Powdered cassia buds are frequently added to the inferior cinnamon powders, but can hardly be looked upon as an adulterant, as they contain a larger proportion of volatile oil than the lower grades of cinnamon

There is still some controversy over whether cinnamon really has the ability to control blood sugar. Extract of Cinnamomum zeylanicum, cinnamaldehyde, shows pronounced hypoglycemic and hypolipidemic effects (in streptozotocin (STZ)-induced diabetic rats): A report in Phytomedicine reiterates that Cinnamomum zeylanicum is a widely accepted traditional medicine to treat diabetes in India. For that reason, the study was designed to identify antidiabetic compounds, if any, by bioassay-guided fractionation.However, it is still controversial whether the beneficial effect is insulin-dependent or insulin-mimetic.

Commercial production of cinnamon bark entails cutting the stems down low after an initial establishment period and harvesting the bushy regrowth stems at regular intervals thereafter. Stems are cut during the rainy season to facilitate peeling of the bark in 2 longitudinal strips.

·         inner surface darker in colour, striated with longitudinally elongated reticulation, fracture, splintery, free from all but traces of cork,

Transverse section of bark (devoid of cork and cortex)

·         small groups of pericylic fibres embedded at intervals in the sclerenchyma,

It is found widely in Sri Lanka. But it also grows in Malabar, Cochin and China. It is also cultivated in Brazil, Mauritius, India and in many other countries.

-Understorey trees in evergreen forests, between 600 and 1200 m.

Cinnamon is among the most grateful and efficient of -the aromatics. It is warm and cordial to the stomach, carminative, distinctly astringent, and, like most other substances of this class, more powerful as a local than as a general stimulant. It is seldom prescribed alone, though, when given in powder or infusion, it will sometimes allay nausea, check vomiting, and relieve flatulence. It is chiefly used as an adjuvant, and enters into a great number of official preparations. It is often employed in diarrhea, in connection with chalk and astringents.

Promotes Shukardhatu in the body and complexion. It manages Dryness of mouth and thirst.

Cinnamon is helpful in diarrhea, hemorrhoids and irritable bowel syndrome.

It is also useful in fever due to intestinal problems.

It is useful in asthma and chronic respiratory problems.

Cinnamon helps in increasing ojas. According to Ayurveda, ojas is responsible for immunity, strength and vitality.

antimicrobial, anti-clotting, anti-inflammatory, anti-spasmodic, diuretic, and aphrodisiac properties, very rich antioxidants and consists of minerals such as manganese, iron and calcium and its cinnamon oil has astringent, antiseptic and carminative abilities.

A study on rats reported that the administration of the bark powder of Cinnamomum verum (10%) for 90 days produced antioxidant activities as indicated by cardiac and hepatic antioxidant enzymes, lipid conjugate dienes and glutathione (GSH).
A study reported that cinnamophilin confers protection against ischemic damage in rat brains when administered at 80 mg/kg at different time intervals (2, 4, and 6 hours) after insult.

Cassia cinnamon is LIKELY SAFE when taken by mouth in amounts commonly found in foods and when taken by mouth in medicinal doses for up to 4 months.
Cassia cinnamon is POSSIBLY SAFE when applied to the skin in the short-term.
Cassia cinnamon is POSSIBLY UNSAFE when taken by mouth in large amounts for a long period of time. Taking large amounts of cassia cinnamon might cause side effects in some people. Cassia cinnamon can contain large amounts of a chemical called coumarin. In people who are sensitive, coumarin might cause or worsen liver disease. When applied to the skin, cassia cinnamon can sometimes cause skin irritation and allergic skin reactions.
Most commonly, spices cause a non-allergic reaction-such as a rash or a cough from inhaling the spice.
Rarely, people report anaphylaxis. This is a severe allergic reaction.
Reactions can occur during or after breathing, eating, or even touching the spice.
They vary between people, and they can range from mild to severe.
Some common symptoms include:
nausea
stomach pain
diarrhea
vomiting
tingling, itching or swelling of the face or other parts of the body
difficulty breathing
hives
dizziness
fainting
rashes, inflammation, irritation, or blistering of the skin

Cinnamon was one of the first known spices. The Romans believed Cinnamons fragrance sacred and burned it at funerals. Because Cinnamon was one of the first spices sought in the 15th Century European explorations, some say it indirectly led to the discovery of America.  It was mentioned in Chinese books on healing more than four thousand years ago. It was also used in Egypt and Europe. In Egypt it was part of a mix of herbs and spices that was used to fill body cavities during mummification. In Europe it was such a hit that it was one of the sparks of the age of exploration.

Cinnamon is the dried inner bark of various evergreen trees belonging to the genus Cinnamomum. At harvest, the bark is stripped off and put in the sun, where it curls into the familiar form called "quills."The cinnamon tree is an Asian evergreen member of the laurel family. It has brown, papery bark and leathery leaves. Yellow flowers appear in the summer followed by purple berries. The best cinnamon is grown in Sri Lanka.