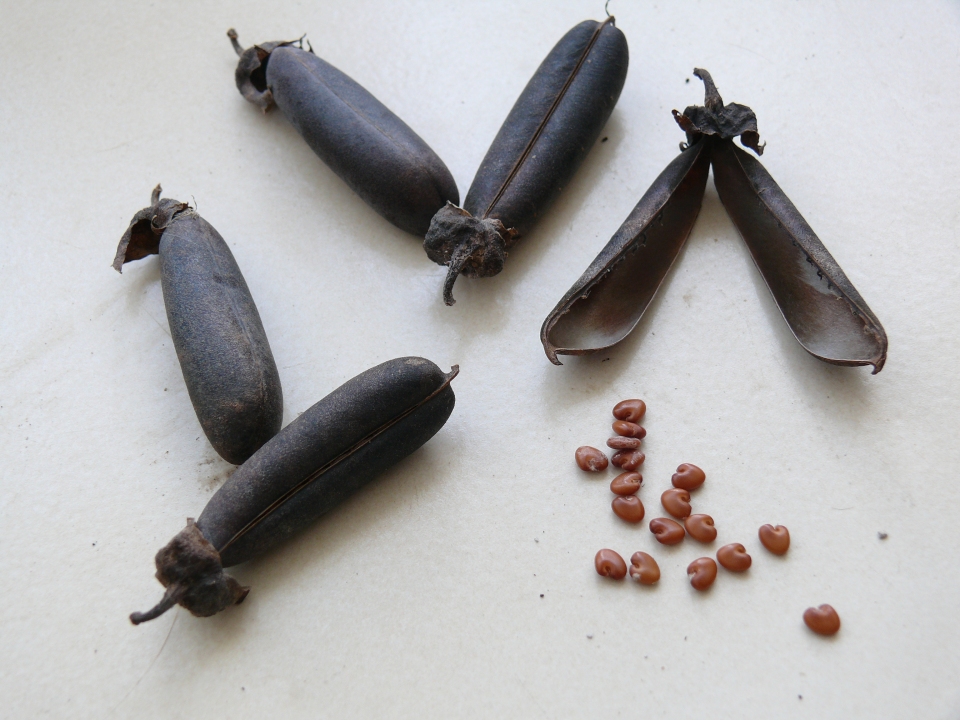 Crotalaria retusa is a species of flowering plant in the legume family known by various common names including devil-bean, rattleweed, shack shack, and wedge-leaf rattlepod It is poisonous to livestock, and contaminates human food. Its original native range is unclear, probably including tropical Asia, Africa and Australia. It has been introduced as a crop plant in many tropical areas and has escaped from cultivation to become a troublesome weed; it is listed as a noxious weed in several US states, Puerto Rico, the Virgin Islands, and is listed as an invasive weed in India, Cuba, and Cocos Island.Unlike some other species of Crotalaria, it is an annual plant.

Crotalaria retusa is grown as a fibre crop and as green manure. It is also used as a forage plant, but is poisonous to livestock.

Plants in this genus generally prefer a sunny position, succeeding in dry to moist, well-drained soils
Grown as a green manure, fibre crop and ornamental, the plant has escaped from cultivation and become naturalized in some areas. It is considered to be invasive in some areas - in Hawaii, for example, it is naturalized in disturbed sites such as roadsides, dump sites and urban areas
The plant can flower and produce fruit all year round
This species has a symbiotic relationship with certain soil bacteria, these bacteria form nodules on the roots and fix atmospheric nitrogen. Some of this nitrogen is utilized by the growing plant but some can also be used by other plants growing nearby

Seed - sow in situ. Pre-soaking the seed for 12 hours in warm water can help to reduce germination time.

Seeds should be collected from mature pods that were allowed to dry on the plant. Sow seeds immediately, because they quickly lose viability.

Supportive treatment. Early diagnosis and avoidance of further exposure to the toxins is important

Crotalaria retusa is a butterfly host plant. According to the Butterfly Circle website, Crotalaria retusa is the food plant for the pea blue butterfly (Lampides boeticus). Unlike other butterfly caterpillars that chew up leaves, the first two instars of the pea blue bore into flower buds of this plant and consume the flower parts contained within. The larger 3rd and final instar caterpillars will move on to eat the developing seeds within seed pods.

C. retusa has been actively introduced to be used as a fibre crop, green manure, forage, ground cover and soil improver, and consequently the risk of new introductions as well as the probability of escape from cultivation is high, mainly in disturbed areas (Wagner et al., 1999; Brunner et al., 2013; PIER, 2013).

Widespread in both the forest and savanna zones of West Africa.

In Australia, where it is considered a native, it grows in the Kimberley on sand, clay, sandstone, and rocky basaltic soils, and is found along creeks and rivers, and on the floodplains
Coastal grassland, along rivers, waste places and fields, at elevations up to 250 metres. Open places in deciduous dipterocarp forests; at elevations up to 1,500 metres

Seeds contain basic alkaloid with N-oxides in their leaves and are used in ethno-medicine for the treatment of fever, as vermifuge and as an antispasmodic (uterus & intestine) agent. Also seeds powdered & boiled with milk are used for enhancing body strength, life span and also for curing skin diseases, leprosy, flatulence and fever. The leaves are the excellent remedy for Ptyalism, Diarrhoea, Scabies and Impetigo (Devendra et al., 2011).

The roots are used against coughing up blood
The plant is used as a treatment for complaints such as cough, dyspepsia, fever, cardiac disorders, stomatitis, diarrhoea, scabies and impetigo
An infusion of the plant is used to bathe children in order to prevent skin infections and also to treat thrush
The leaves, mixed with those of Crotalaria quinquefolia, act internally as well as externally against fever, scabies, lung diseases and impetigo
A decoction of the flowers and leaves is used to soothe a cold
The seeds are eaten raw to act as an analgesic to deaden the pain of a scorpion sting. The powdered seeds, mixed with milk, are eaten in order to increase body strength; they are also used to treat skin diseases
The plant contains hepatotoxic pyrrolizidine alkaloids

Raw as well as seeds paste

Edibility
- Flowers and leaves reportedly eaten as vegetable.
- In Vietnam, seeds are roasted and eaten.
Folkloric
- No reported folkloric medicinal use in the Philippines.
- In Ayurveda, plant vitiated kapha, vata, cough, dyspepsia, fever.
- Powdered seeds mixed with milk used for increasing body strength; also used for skin diseases.
- In Cameroon, plant used in the treatment of eczema.
- In Tamil Nadu, India, plant used for cough, dyspepsia, fever, cardiac disorders, stomatitis, diarrhea, scabies, impetigo.
- In Zaria, northern Nigeria, powdered plant mixed with roasted black caraway, taken in small quantities for stomach coli and flatulence. Squashed flowers with added potash, cooked into a soup, and taken for amenorrhea. For scabies, decoction of whole plant used for bathing.
- Roots used for hemoptysis.
- Leaves mixed with those of Crotalaria quinquefolia, consumed or applied externally for fever, scabies, lung afflictions, and impetigo.
- In Bangladesh, tribal people in the Chittagong Hill tracts use fresh juice and paste of leaves and seeds for skin diseases.
- In India, seeds used for skin infection, constipation and pain.
Others
- Fiber: Bark and stems are sources of strong fiber; used for cordage and making canvas.
- Dye: In East Africa, used as dye plant.
- Oil: Seed yields a non-edible, non-dryiing oil, with potential for use in making shampoo, creams, and shoe polish.
- Livestock hazard: Poses a potential hazard to livestock because of pyrrolizidine alkaloid content.

Crotalaria retusa is an erect, annual plant or short-lived perennial with more or less woody stems. It can grow from 60 - 120cm tall
The plant is harvested from the wild for local use as a food, medicine and source of materials. It is sometimes cultivated for the fibre it provides, as a medicinal plant, and is also grown as a green manure crop
It is occasionally grown purely as an ornamental, though it is also sometimes considered to be a weed