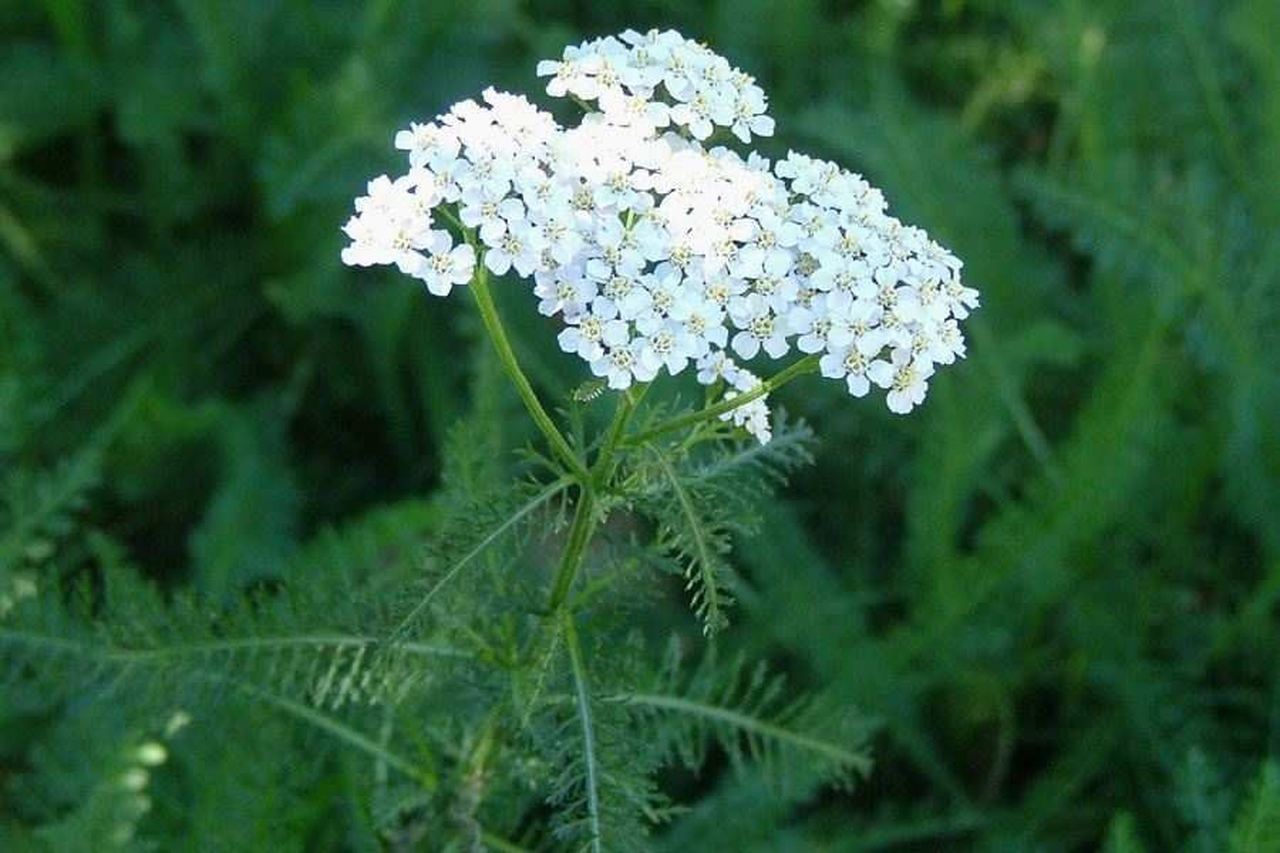 Achillea millefolium, commonly known as yarrow or common yarrow, is a flowering plant in the family Asteraceae. It is native to temperate regions of the Northern Hemisphere in Asia, Europe, and North America. It has been introduced as a feed for livestock in places like New Zealand and Australia, where it is a common herb of both wet and dry areas, such as roadsides, meadows, fields and coastal places

Yarrow and tortoiseshell are considered to be lucky in Chinese tradition.
In classical Greece, Homer tells of the centaur Chiron, who conveyed herbal secrets to his human pupils, and taught Achilles to use yarrow on the battle grounds of Troy.
British folklore
In the Hebrides a leaf held against the eyes was believed to give second sight.
Chinese divination
A bunch of 50 yarrow Achillea millefolium subsp. millefolium var. millefolium stalks, used for I Ching divination.
The stalks are dried and used as a randomising agent in I Ching divination.
Native American uses
Yarrow and its North American varieties were traditionally used by many Native American nations across the continent. The Navajo historically considered it a "life medicine" and chewed the plant for toothaches and used its infusions for earaches. The Miwok in California use the plant as an analgesic and head cold remedy.

In New Mexico and southern Colorado, it is called plumajillo(Spanish for little feather) from its leaf shape and texture
The English name yarrow comes from the Saxon (Old English) word gearwe, which is related to both the Dutch word gerw and the Old High German word garawa
The word “Achillea” refers to the Greek hero Achilles, who is believed to have carried the plant to treat the wounds of the soldiers, while the word millefolium meaning thousand-leaf, refers to the multipinnate leaves.

Decoctions have been used to treat inflammations, such as hemorrhoids, and headaches. The most medicinally active part of the plant is the flowering tops. They also have a mild stimulant effect, and have been used as a snuff. Popular in European folk medicine, yarrow contains flavonoids (plant-based chemicals) that increase saliva and stomach acid, helping to improve digestion. Yarrow may also relax smooth muscle in the intestine and uterus, which can relieve stomach and menstrual cramps. The flowers are used to treat various allergic mucus problems, including hay fever The dark blue essential oil, extracted by steam distillation of the flowers, is generally used as an antiinflammatory3 or in chest rubs for colds and influenza. The leaves encourage clotting, so it can be used fresh for nosebleeds.4 The aerial parts of the plant are used for phlegm conditions, as a bitter digestive tonic to encourage bile flow, and as a diuretic.

Achillea millefolium is cultivated as an ornamental plant by many plant nurseries. It is planted in gardens and natural landscaping settings of diverse climates and styles. They include native plant, drought-tolerant, and wildlife gardens. The plant is a frequent component of butterfly gardens. The plant prefers well-drained soil in full sun, but can be grown in less ideal conditions.

For propagation, seeds require light for germination, so optimal germination occurs when planted no deeper than one-quarter inch (6 mm). Seeds also require a germination temperature of 18–24 °C (64–75 °F). It has a relatively short life in some situations, but may be prolonged by d ivision in the spring every other year, and planting 12 to 18 in (30–46 cm) apart. It can become invasive

A. millefolium can be planted to combat soil erosion due to the plants resistance to drought. Before the arrival of monocultures of ryegrass, both grass leys and permanent pasture always contained A. millefolium at a rate of about 0.3 kg/ha. At least one of the reasons for its inclusion in grass mixtures was its deep roots, with leaves rich in minerals. Thus its inclusion helped to prevent mineral deficiencies in the ruminants to which it was fed.
It was introduced into New Zealand as a drought-tolerant pasture. It is very prevalent

Yarrow (Achillea millefolium) is an erect herbaceousperennial plant that produces one to several stems (0.2 to 1m tall) and has a rhizomatous growth form. Leaves are evenly distributed along the stem, with the leaves near the middle and bottom of the stem being the largest. The leaves have varying degrees of hairiness (pubescence). The leaves are 5–20 cm long, bipinnate or tripinnate, almost feathery, and arranged spirally on the stems. Yarrow grows up to 3500m above sea level. The plant commonly flowers from May through June, and is a frequent component in butterfly gardens. Common yarrow is frequently found in the mildly disturbed soil of grasslands and open forests. Active growth occurs in the spring. In North America, there are both native and introduced genotypes, and both diploid and polyploid plants.

Yarrow grows from sea level to 3,500 metres (11,500 ft) in elevation. The plant commonly flowers from May to July. Common yarrow is frequently found in the mildly disturbed soil of grasslands and open forests. Active growth occurs in the spring.

The plant is native to Eurasia and is found widely from the UK to China.

In North America, both native and introduced genotypes, and both diploid and polyploid plants are found. It is found in every habitat throughout California except the Colorado and Mojave Deserts.Common yarrow produces an average yield of 43,000 plants per acre, with a total dry weight of 10,500 lbs.

The plant is found in Australia as an introduction.

Several cavity-nesting birds, including the common starling, use yarrow to line their nests. Experiments conducted on the tree swallow, which does not use yarrow, suggest that adding yarrow to nests inhibits the growth of parasites

It has a specific action on the pelvic organs and is used in amenorrhoea, menorrhagia and leucorrhoea. Also given in dyspepsia, flatulence, diarrhoea and haemorrhoids. Externally used as an application to suppurating wounds. Active ingredients of Achillealike choline and achilleine are regarded as lipotropic and sudorific and effective in infectious hepatitis.
Achillea millefolium Linn., therefore, enters into many such compound preparations where indigestion, hepatic insufficiency or anaemic conditions are primary symptoms, or in nutrition-related complications

Yarrow was formerly used for medicinal purposes: to break a fever by increasing perspiration, to treat hemorrhaging and as a poultice for rashes. A tea used by Native Americans to cure stomach disorders was made by steeping the leaves.

Pregnancy and breast-feeding: Yarrow is LIKELY UNSAFE when taken by mouth during pregnancy as it can affect the menstrual cycle and might cause miscarriage. .
There is not enough reliable information about the safety of taking yarrow if you are breast-feeding. Stay on the safe side and avoid use.
Bleeding disorder: Yarrow might slow blood clotting. In theory, taking yarrow might increase the risk of bleeding in people with bleeding disorders.
Allergy to ragweed and related plants: Yarrow may cause an allergic reaction in people who are sensitive to the Asteraceae/Compositae family. Members of this family include ragweed, chrysanthemums, marigolds, daisies, and many others. If you have allergies, be sure to check with your healthcare provider before taking yarrow.
Surgery: Yarrow might slow blood clotting so there is a concern that it might increase bleeding during and after surgery. Stop taking yarrow at least 2 weeks before a scheduled surgery.

Traditional herbalists recommends this herb for applications such as: hot, dry burning skin, at the beginning of acute asthenic fevers, with suppressed secretion; deficient renal action, with renal or urethral irritation; acute or chronic Brights disease in its incipient stage. Leucorrhoea with relaxed vaginal walls. Menorrhagia and amenorrhoea; hemorrhoids with bloody discharge, atonic gastric and intestinal dyspepsia; passive hemorrhages. In addition he recommends it for the following patholgies : haematuria, uterine hemorrhage, intestinal irritation, leucorrhoea, fevers, ureamia, oedema, tonsillitis, epididymitis.
A. millefolium has seen historical use as in traditional medicine, often because of its astringent effects. The herb is purported to be a diaphoretic, astringent,tonic, stimulant and mild aromatic. It contains isovaleric acid, salicylic acid, asparagin, sterols, and flavonoids. The genus name Achillea is derived from mythical Greek character, Achilles, who reportedly carried it with his army to treat battle wounds. This medicinal use is also reflected in some of the common names mentioned below, such as staunchweed and soldiers woundwort
Yarrow and tortoiseshell are considered to be lucky in Chinese tradition
Common yarrow is used be Plains Indigenous peoples, such as the Pawnee, who use the stalk for pain relief. The Cherokee drink a tea of common yarrow to reduce fever and aid in restful sleep
The Ojibwe people historically sprinkled a decoction of yarrow leaves on hot stones and inhaled it to treat headaches,[46] as well as applied decoctions of the root onto skin for its stimulant effect

Yarrow, found in the Western Himalayas from Kashmir to Kumaon, is revered for its healing properties. It is said that the herb’s Latin name, Achillea millefolium dates back to the mythical figure Achilles, who used the herb for healing wounds.
Yarrow is a potent styptic, which stops bleeding and heals skin quickly. It is often used in herbal remedies designed to treat heavy bleeding from menstrual periods to bleeding ulcers. TheGerman Commission E recommends Yarrow in dyspeptic ailments like mild spasms and ailments of the gastrointestinal tract.
KEY WORDS: rajamari Scientific name: Achillea millifolia Linn