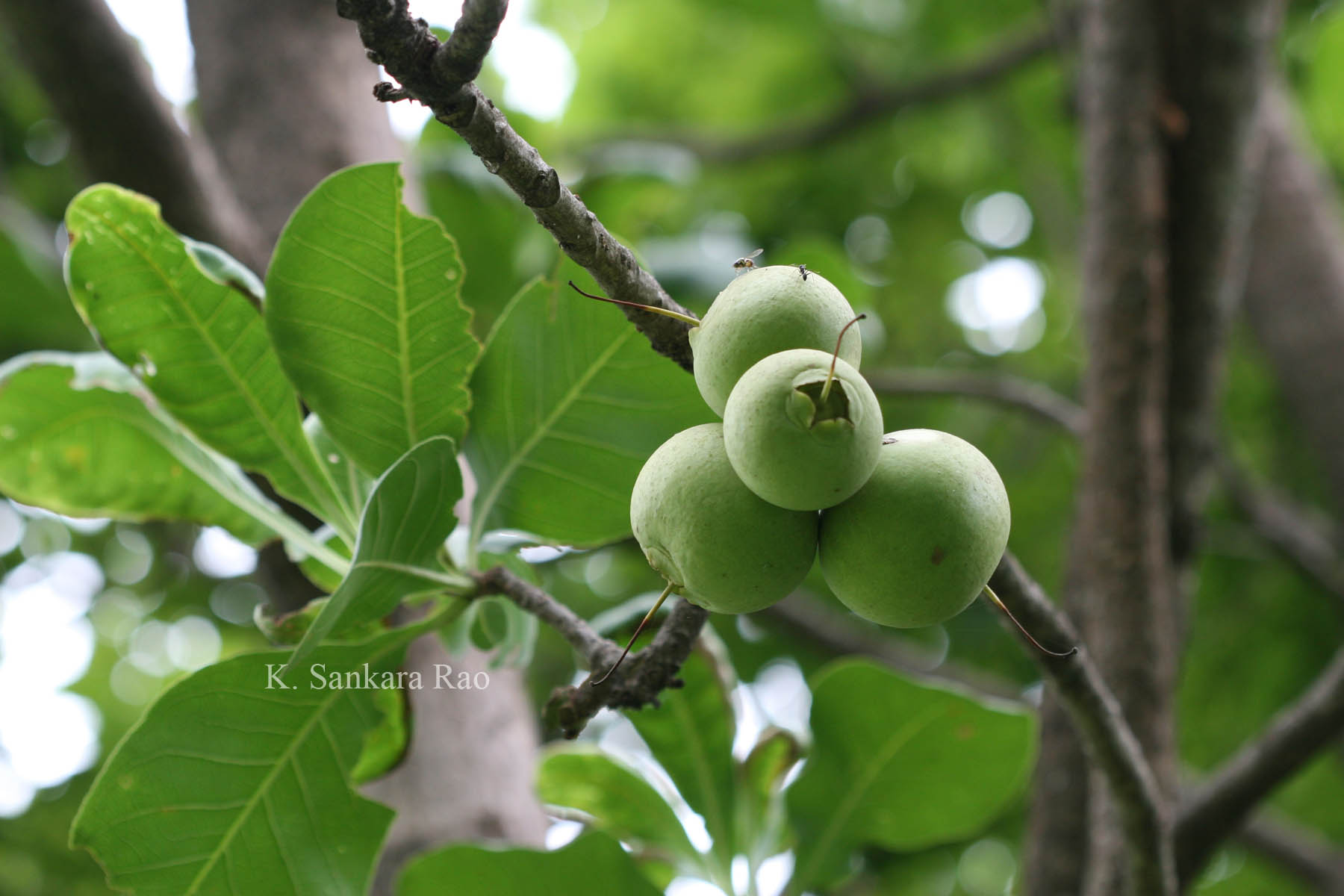 Careya arborea is a species of tree in the Lecythidaceae family, native to the Indian Subcontinent, Afghanistan, and Indochina. It is known as Kumbhi in Hindi, and Slow Match Tree in English

--In colonial times in India, the fibrous bark of this tree was found to be an ideal substitute for Beech bark as matches for matchlocks

Careya arborea Roxb. is commonly known as Kumbhi in Hindi and Wild Guava in English. It is widely distributed in Sri Lanka, India, Peninsula and Malay up to an altitude of 1500 meters  This plant is very important in the field of medicines and is being used for treatment of various ailments. It is also used for other purposes e.g. methanolic extract of the leaf is a good indicator in acid-base titrations , crushed bark of the root is mixed with water to stupefy fishes , stem bark is used for clothing and to produce yellow colored dye and leaves are used as green manure

Prefers a well-drained, sandy or even rocky soil. Requires a sunny positionIn India the annual diameter increment can be up to 0.5 cm, but growth of coppice is faster, 0.6 - 0.9 cm in diameter for 8-year-old coppice shoots.The tree is highly fire resistant and coppices well.

The plant is a popolar herbal remedy in India, where it is often harvested from the wild for local use and trade.

In colonial times in India, the fibrous bark of this tree was found to be an ideal substitute for Beech bark as matches for matchlocks.

Species of the Planchonia genus are morphologically similar to many Barringtonia species, resulting in the original classification of P. careya as Barringtonia careya F. Muell. (Barringtonaceae) (1866). This classification was later changed to Careya arborea Roxb. var. australis Benth. (alternatively referred to as C. australis F. Muell.) in 1882, due to the morphological similarities with the genus, Careya (Barrett, 2006).

-Various formulations containing C. arborea as one of the active components are available in market e.g. Hamdard Ghutti® (Hamdard Laboratories (Waqf) Pakistan), a pediatric preparation used to evacuate bowl and treat constipation of newborn and infants
The tree yields a medium-weight to heavy hard wood with a density of 770 kg/m cubic to over 1000 kg/m cubic at 15% moisture content. Heartwood pale red to dark red-brown in older trees, sapwood wide, pale reddish-white; grain straight; texture medium and even. Shrinkage of the wood is very high, so it should be seasoned slowly as it easily develops surface checks, end splits, and is very liable to warp and twist It is moderately hard and somewhat difficult to saw, but presents no difficulties when worked with hand and machine tools. It yields a smooth finish and a good polish. The wood is durable, especially under water.
The wood is used, mainly in India and Myanmar, for general construction (house posts, planking), furniture and cabinet work, carts, mouldings, turnery, piling and agricultural implements.

C. arborea is a tree having a spreading crown and height of about 20 meters. Arrangement of leaves is alternate. Flowers are large, sessile, ill smelling and yellowish white colored. Inflorescence of flowers is racemose. Flowering season is March to April. Fruit is large, round shaped, fleshy and green in color, seeds being embedded in this fleshy pulp. Bark is of dark grey color and usually exfoliates in thin strips

Stem Bark
Stem bark of C. arborea is of dark grey color, thick and rough having cracks which are usually shallow. It is odorless and has astringent taste. In transactional view, the bark shows 8 to 16 layers of rectangular shaped, brownish black colored, thick walled cork cells. Inside the cork, there are 2 to 3 layers of phellogen which produce phelloderm cells centripetally. Parenchymatous cells of cortex are multilayered, polygonal to rectangular in shape. Secondary phloem is also present consisting of phloem parenchyma, fibers, vessels and 1 to 2 seriate medullary rays. Phloem parenchyma and cortex cells contain crystals of calcium oxalate. In powder of the bark, thick walled lignified fibers, about 38 to 66 micrometer in length and crystals of calcium oxalate of 10 to 15 micrometer are characteristic  .
Leaf
Color of leaf is green, shape is obovate and apex is acuminate with crenate margin. Length and width of fresh leaf is 15-22 cm and 7-12 cm respectively with 0.1-1.8 cm long petiole. In transverse section of leaf through midrib, thick cuticle over the epidermis is prominent on both adaxial and abaxial sides. Inside the epidermis, there is collenchyma tissue, a single layer of palisade cells and few layers of spongy mesophyll cells. In the midrib, one large central and two relatively lateral bundles of vascular tissue embedding in the spongy mesophyll cells are found. These vascular bundles are surrounded by lignified sclerenchyma fibers. Xylem tissue consists of fibers, tracheids, parenchyma and vessels forming the shape of a cup and phloem surrounds it. Stomata are of anisocytic type. Leaf constants per mm2 area are: Stomata number, upper surface (28.00), lower surface (188.00); Stomatal index, upper surface (8.26), lower surface (31.18); Vein-islet number (6.00-8.00); Veinlet termination number (7.00-9.00); Palisade ratio (6.00-8.00 per cell) [3] .
Fruit
Fruit is berry type, large and green colored. It has persistent style and calyx and weighs about 100 g. Outermost layer of fruit is epidermis with a waxy covering. Inside epidermis there is collenchymatous hypodermis, inside which loosely packed parenchymatous cells are present having scattered vascular bundles. Some of these parenchyma cells have stone cells which provide mechanical support. Placentaion of ovules is axial with 4 locules

Shady areas and forests of the subHimalayas (from Jammu to West Bengal), Tamil Nadu and Madhya Pradesh.

-Scattered but locally common in primary or secondary, evergreen or deciduous, slightly seasonal forest, sometimes in more open country and along forest edges. It is absent from perhumid rain forest.

-The juice of the bark, and the calices of the flowers, are astringent and mucilaginous]. They are often used internally in India for treating coughs and colds, and are applied externally as an embrocation
An astringent gum exudes from the fruit and stem
The pulped leaves are used as a poultice

The therapeutical importance of Careyaarborea is mentioned in Materia Medica, Ayurveda, Siddha and Unani system of medicines. The root paste is used in body ache. Moreover, it is taken in the morning in empty stomach against joint pain for five days. Root-bark decoction (with long pepper) is used in fever, Stem-bark powder (paste with honey) is given to children in cold and cough; Stem-bark (paste with margosa) heals leucoderma. The bark of the tree and the sepals of the flowers are used as astringent and mucilaginous being administered internally in coughs and colds and applied externally as an embrocation. The stem bark of C. arborea is traditionally used in the treatment of tumours, bronchitis, skin disease, epileptic fits, astringent antidote to snake venom, abscesses, boil and ulcer . Infusion of the flower is used after childbirth to heal rupture caused by childbirth.

-In colonial times in India, the fibrous bark of this tree was found to be an ideal substitute for Beech bark as matches for matchlocks
Lodhas use fresh stem bark decoction for washing septic wounds of cattle, and keep a dry fruit in a room as snake repellant. Oraons use powdered stem, root and leaf for poisoning fish.

In 1819 a genus of flowering plants in the family Lecythidaceae was described as Careya large fruits with woody skins. The family comprises of tropical trees consisting of about 20 genera and 450 species . The genus careya includes three different species which includes Careyasphaerica Roxb, Careyaherbacea Roxb and Careyaarborea Roxb. Careyaarborea is a deciduous tree about 20 m high and is known as ‘Padmaka’ in Ayurveda . The accepted botanical name is kumbi  and “Wild guava” in English
KEY WORDS: kumbhi Careya arborea Roxb.