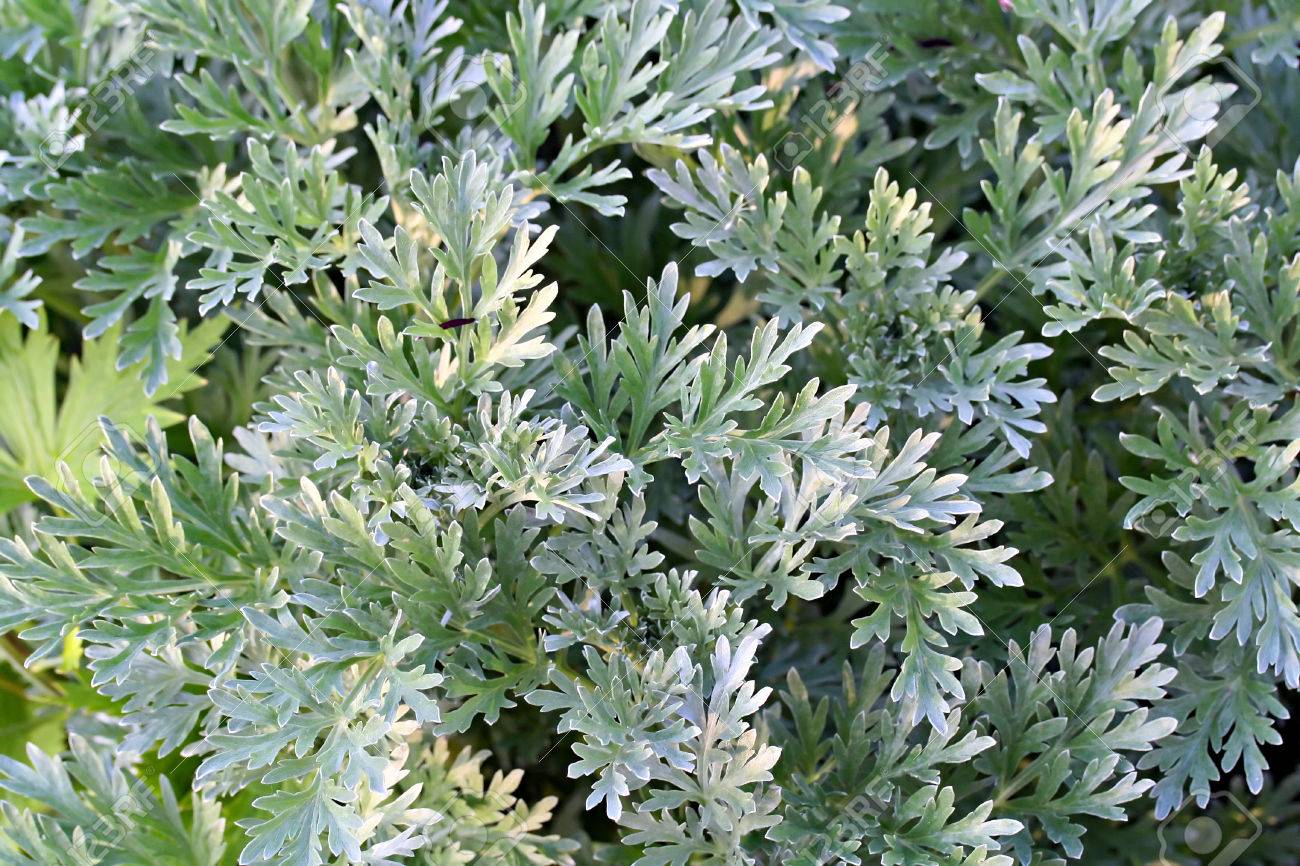 Artemisia absinthium L. (Asteraceae), commonly known as wormwood in United Kingdom and absinthe in France, is an aromatic, perennial small shrub. It is locally known as “chajret mariem” in Tunisia.

It was always used as a drink in France called absinthe which caused dementia. In the 18th century, alcoholic decoctions of wormwood and other plants were used as all-purpose remedies or “cure-alls,” but it was not until the beginning of the 19th century that the wormwood-flavored alcoholic extracts and distillates were seen not only as potent medicines, but also as aperitifs, and the large scale production of absinthe began. In addition, Artemisia absinthium L. was used freshly for the plant species, as well as for the alcoholic beverage.

This plant, and its cultivars Lambrook Mist and Lambrook Silver have gained the Royal Horticultural Societys Award of Garden Merit. These two short cultivars are very similar and more silver than typical British absinthium material and probably derive from southern Europe. Lambrook Silver is the earliest of these cultivars having been selected in the late 1950s by Margery Fish who developed the garden at East Lambrook Manor. Lambrook Mist was selected about 30 years later by Andrew Norton, a subsequent owner of the garden. Both gained their AGMs (Award of Garden Merit) during the RHS Artemisia Trial 1991–3.

Artemisia comes from Ancient Greek ἀρτεμισία, from Ἄρτεμις (Artemis). In Hellenistic culture, Artemis was a goddess of the hunt, and protector of the forest and children. absinthum comes from the Ancient Greek ἀψίνθιον, meaning the same. An alternative derivation is that the genus was named after Queen Artemisia who was the wife and sister of Mausolus ruler of Caria. When Mausolus died c. 353 BC, he was buried in a huge tomb dedicated to his memory – the Mausoleum at Halicarnassus, the ruins of which are still present at Bodrum in modern-day Turkey. The word "wormwood" comes from Middle English wormwode or wermode. Websters Third New International Dictionary attributes the etymology to Old English wermōd (compare with German Wermut and the derived drink vermouth), which the OED (s.v.) marks as "of obscure origin".
Rasa: Kashaya Tikta
Guna: Laghu Ruksha Teeskhsna
Veerya: Ushna
Vipaka: Katu
Karma: Kaphahara Pittahara Vatahara

Wormwood essential oil has been widely used mainly for its neuroprotective , antifungal , antimicrobial , insecticidal, acaricidal , anthelmintic, antimalarial, hepatoprotective, and antidepressant proprieties. In addition, the herb is used to make a tea for helping pregnant women during pain of labor and in treating leukaemia and sclerosis . Moreover, the organic extract of this herb revealed toxic and antifeedant effect on Leptinotarsa decemlineata. It was always used as a drink in France called absinthe which caused dementia.

The plant can easily be cultivated in dry soil. It should be planted under bright exposure in fertile, mid-weight soil. It prefers soil rich in nitrogen. It can be propagated by ripened cuttings taken in spring or autumn in temperate climates, or by seeds in nursery beds. A common consideration applies to growing the plant with others as it tends to stunt their growth; accordingly it is not considered to be a good companion plant. Artemisia absinthium also self-seeds generously. It is naturalised in some areas away from its native range, including much of North America and Kashmir Valley of India.

Cultivar Silver Ghost is a taller silver plant which flowers much later (August – September) than typical absinthium (June – July) in UK and therefore holds its silver appearance for longer. This and a more feathery leaved cultivar Persian Lace were selected by National Collection Holder John Twibell in the 1990s.

In one day, 3 to 5 g of the herb can be taken as aqueous extract. Internal dose of the infusion is 1 cup freshly prepared tea taken 30 minutes before each meal.

Because wormwood is a bittering agent, it worked well as a hop substitute for beer.

It was once widely promoted that excessive absinthe drinking caused effects that were discernible from those associated with alcoholism, a belief that led to the coining of the term absinthism. One of the first vilifications of absinthe followed an 1864 experiment in which Magnan simultaneously exposed one guinea pig to large doses of pure wormwood vapour, and another to alcohol vapours. The guinea pig exposed to wormwood vapour experienced convulsive seizures, while the animal exposed to alcohol did not. Magnan would later blame the naturally occurring (in wormwood) chemical thujone for these effects
The spirit was banned in many countries and United States at the beginning of the 20th century, because it was believed to be hallucinogenic. Thujone an important chemical present in the essential oils of Artemisia absinthium was blamed for the hallucinogenic action of
Absinthe
liquor. The early 2000s saw the repeal of absinthe bans around the world,  just a century after the bans were put in place and a little over two centuries after the modern recipe was popularized. In 2005, Switzerland repealed its ban, once again making absinthe legal in its country of origin, and as of 2007, at least two brands of absinthe were being legally bought and sold in the United States

The herb has always been of a great botanical and pharmaceutical interest and is employed in folk medicine against various paints
In the food industry, a large spectrum of microorganism leads to food spoilage. Therefore, preservation of food material from degradation mainly by oxidation processes and microorganism activity during production, storage, and marketing is an important stage.

Artemisia absinthium is a herbaceous perennial plant with fibrous roots. The stems are straight, growing to 0.8–1.2 metres (2 ft 7 in–3 ft 11 in) (sometimes even over 1.5 m, but rarely) tall, grooved, branched, and silvery-green. The leaves are spirally arranged, greenish-grey above and white below, covered with silky silvery-white trichomes, and bearing minute oil-producing glands; the basal leaves are up to 25 cm long, bipinnate to tripinnate with long petioles, with the cauline leaves (those on the stem) smaller, 5–10 cm long, less divided, and with short petioles; the uppermost leaves can be both simple and sessile (without a petiole). Its flowers are pale yellow, tubular, and clustered in spherical bent-down heads (capitula), which are in turn clustered in leafy and branched panicles. Flowering is from early summer to early autumn; pollination is anemophilous. The fruit is a small achene; seed dispersal is by gravity.

The  young stem  twigs  shows  outer  single  layer  of  epidermis which consists of cubical cells.  Many of the epidermal  cells  are extended outwards to form trichomes. The trichomes are formed of cells  arranged  in  single row or the  lower  being 2-5 celled. In the  mature  stem the  endodermis  has casparian  strips  while  the cortex  and  pith  are  parenchymatous. The  stem  bears  the  usual structure. The winged petiole in T.S. shows a wavy outline. The trichomes are present all along the margins. The middle vascular bundle  is  larger in  size showing  prominent  xylem  and phloem layers. Glandular trichomes are present on both the surfaces. The stomata are present on the lower surface. The flowering heads are surrounded by 8-10 bracts.  The anthers are  yellow in color.  The powdered  drug  is  brownish  yellow in  color  and  characteristic non- lignified hair are found to be T- shaped

distributed mainly in the temperate zones of Asia, Europe and North America. A. absinthium is one of the important specie among the 45 members represented by genus Artemisia in the Indian flora, and is naturally distributed in the Himalayan region across Jammu and Kashmir at an altitude range of 1500-2700 m

It grows naturally on uncultivated arid ground, on rocky slopes, and at the edge of footpaths and fields.

Although once relatively common, it is becoming increasingly rare in the UK where it has recently been suggested that it is an archaeophyte rather than a true native

It is an ingredient in the spirit absinthe, and is used for flavouring in some other spirits and wines, including bitters, vermouth and pelinkovac. As medicine, it is used for dyspepsia, as a bitter to counteract poor appetite, for various infectious diseases, Crohns disease, and IgA nephropathy.

Its use has been claimed to remedy indigestion and gastric pain, it acts as an antiseptic, and as a febrifuge. For medicinal use, the herb is used to make a tea for helping pregnant women during pain of labor. A dried encapsulated form of the plant is used as an anthelmintic.

Wormwood is taken in the form of infusion and decoction. The dried – pulverized herb is used for this purpose. Along with powdered herb, the extracts and tinctures in liquid or solid forms are also available which are used for oral administration. Wormwood is often combined with other medicinal herbs according to the ailment to be treated.
Externally, the drug is applied for poorly healing wounds, ulcers, skin blotches and insect bites.

The herb has always been of a great botanical and pharmaceutical interest and is used in indigenous systems of medicine as a vermifuge, an insecticide, acaricide, cardiac stimulant , antispasmodic, antiseptic and diuretic, and for the treatment of chronic fevers and hepatitis, stomach aches, restoration of declining mental function and to improve memory . Its essential oil has antimicrobial, antifungal, neuroprotective , antimalarial , and antidepressant activity

it is given to women for menstrual disorders but it reduces chances of implantation/conception and hence a woman who is trying for baby should avoid its long term use.

Thujone, a characteristic component of essential oil of the A. absinthium L., is a known central nervous system toxin; however, the toxicological risk from use of conventional wormwood preparations is very low and aqueous extracts contain little thujone. Excessive dosing, long-term use or use of the essential oil could lead to toxicity “absinthism” -mental disorder in humans  with the symptoms of hallucinations, sleeplessness and convulsions. The side effects may include brain damage and even death, insomnia, intestinal cramps, nausea, restlessness, seizures, stomach cramps, tremors, urine retention, vertigo and vomiting

Artemisia absinthium Linn. (Wormwood) is an important perennial shrubby plant, belongs to the genus Artemisia with more than 500 species, distributed in the temperate areas across the globe and within India has been recorded in the Himalayan region. It is used as herbal medicine in Ayurveda, Homeopathy, Unani and Siddha; besides, has been incorporated as feed additive in livestock nutrition for augmenting nutrient utilization and animal performance. It has a great importance as a folk medicine in ancient history from the time of Greek as an antiseptic, anthelminitc, antipyretic, antimalarial, antioxidant, hepatoprotective and neuroprotective.
KEY WORDS: indhana , Artemisia absinthium Linn. , worm wood