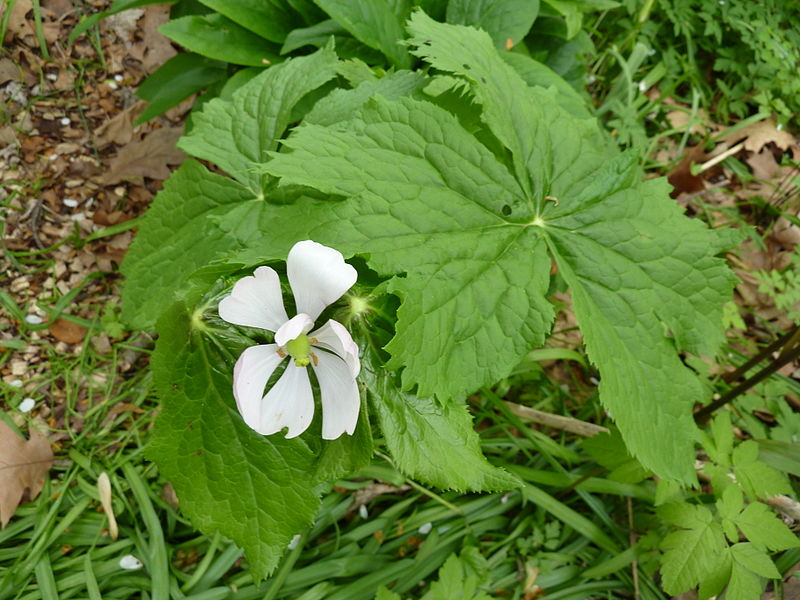 Podophyllum hexandrum a perennial herb, bearing the common name Himalayan Mayapple known as Aindri (a divine drug) in ancient times is native to the lower elevations in and surrounding the Himalaya. It has been reported to be used through the ages and in modern times as an intestinal purgative and emetic, salve for infected and necrotic wounds, and inhibitor of tumor growth. The rhizome of the plant contains a resin, known generally and commercially as Indian Podophyllum Resin, which can be processed to extract podophyllotoxin or podophyllin, a neurotoxin.

The American Indians and colonists used podophyllum resin as a cathartic and anthelmintic, an antidote for snakebites, and a poison. Podophyllum was included in the 1864 British Pharmacopoeia and was a common ingredient in many proprietary medicines including Carters Little Liver Pills. Anticancer activity has been associated with podophyllum resin; derivatives have been used successfully in controlled clinical trials. In 1942, a study was published that demonstrated the efficacy of a 25% topical application of podophyllum in mineral oil for the short-term treatment of condylomas. This was regarded as a therapeutic breakthrough at the time

Two species of the genus Podophyllum are known as growing in China while Podophyllum Emodi, which inhabits the interior ranges of the Himalayas and is very abundant in Cashmere, is recognized in the Br.

Podophyllotoxin is the major lignan present in the resin and is a dimerized product of the intermediates of the phenylpropanoid pathway. The starting material of etoposide (Vepeside), an FDA approved anticancer drug is podophyllotoxin and has been used to treat testicular cancer as well as lung cancer by inhibiting replication of cancer cells. Podophyllotoxin finds use as a precursor for the semi-synthetic topoisomerase inhibitors in the treatment of leukemias, lung and testicular cancers, dermatological disorders like warts, rheumatoid arthritis and psoriasis. It also has numerous applications in modern medicine by virtue of its free radical scavenging capacity.

Raising Propagules : It is propagated from seeds or by division of rootstock. Seed germination is poor. Seeds are to be sown before the onset of winter i.e. in spring season. The germination percentage of seeds ranges from 41-45%. Seedlings exhibit extremely slow growth rate and even after two seasons of growth. They could attain a height of 6.5-7.2 cm. The survival rate of this plants ranges from 85.0-92.6% by this method.

The plant is propagated by seeds and rootstocks.

It is a perennial crop. The plants remain in vegetative stage during the first year and flowering start from 2 nd and 3rd  year onwards. Rootstocks are harvested in spring season. Rootstocks are found to be rich in resin contents during this season.

Podophyllum hexandrum is succulent erect herb, glabrous, up to 30 cm tall with creeping long knotty rhizomes. Stem one or two, simple, leafy without top.
Leaves alternate, palmate, up to 25 cm in diameter, deeply divided in 3-5 lobes, toothed, purple spotted.
Floral Characteristics
Flowers are white to pinkish in colour, 4 cm across, appear in the fork of the stem.
Sepals are 3 in number and petaloid.
Stamens are usually 6. Fruits are ovoid, pulpy 5 cm long and scarlet when ripe.

"Rhizome horizontal, nearly cylindrical, jointed, compressed on the upper and lower surfaces, sometimes branched; in pieces from 3 to 20 cm. in length, the intemodes from 2 to 9 mm. in diameter; externally dark brown, longitudinally wrinkled or nearly smooth with irregular, somewhat V-shaped scars of scale leaves, nodes annulate, upper portion marked with large, circular, depressed stem-scars and sometimes with buds or stem-bases; at or near the nodes on the lower portion occur numerous root-scars or roots from 2 to 7 cm. in length and about 2 mm. in thickness; fracture short; internally, bark light brown, wood with small yellowish, vascular bundles, pith large and white; odor slight; taste sweetish, disagreeably bitter and acrid. Under the microscope, a transverse section of the rhizome of Podophyllum shows an outer layer of one or two rows of reddish-brown cells; parenchyma of cortex and pith with numerous single, spherical, polygonal, or 2- to 6-compound starch grains, or rosette aggregates of calcium oxalate; vascular bundles from 24 to 34, arranged in a circle between cortex and pith. The powder is light brown, with a pronounced and characteristic odor; starch grains numerous, spherical, polygonal or 2- to 6-compound, the individual grains from 0.003 to 0.015 mm. in diameter; calcium oxalate crystals few, in rosette aggregates from 0.05 to 0.08 mm. in diameter and occasionally in raphides from 0.03 to 0.09 mm. in length; tracheae with simple pores or reticulate thickenings; fragments of starch-bearing parenchyma and reddish-brown cork cells. Podophyllum yields not more than 3 per cent. of ash

It is a native to Himalayan region (Uttarkashi) in India. Climate and Soil The species thrives best as undergrowth as well as in forests in well drained humus rich soil in temperate and subalpine zones.

: Grows well as undergrowth in fir forests, rich in humus in shady localities in association with Rhododendron, Salix, Juniperus and Viburnum spp. at altitudes of 2500 and 4200 m. Also found in open alpine meadows.

Podophyllum has been used topically in the treatment of genital warts and hairy leukoplakia. Semisynthetic derivatives of podophyllotoxin are used to treat RA and various cancers, including refractory testicular tumors and small-cell lung cancer; however, limited information is available. Use as a cathartic is considered unsafe.

Rhizomes are used for typhoid fever, jaundice, dysentery, chronic hepatitis, scofula, rheumatism, skin diseases, tumerous growth, kidney & bladder problems.
Plant is also used for gonorrhoea, and syphilis.
The podophyllum is used as a purgative and also for treatment of vaginal warts.
Two derivatives of podophyllotoxin, called eloposide and teniposide are employed for treatment of cancers. Root paste is applied on ulcers, cuts and wounds.

The plant contains podophyllin, which has an antimiotic effect (it interferes with cell division and can thus prevent the growth of cells). It is, therefore, a possible treatment for cancer, and has been used especially in the treatment of ovarian cancer. The roots are also antirheumatic

The whole plant, but especially the root, is cholagogue, cytostatic and purgative

It should not be prescribed for pregnant women. Birth defects, fetal death, and stillbirth have been associated with the use of podophyllum in pregnant patients. Pregnant patients or patients planning to become pregnant should avoid use of this product. Excretion into breast milk is unknown. Avoid use in nursing patients.

The leaves and the roots are poisonous. Only the root is poisonous, it is more toxic than P. peltatum

A medicinal resin is obtained from the plant. It is extracted with alcohol

Podophyllum hexandrum is succulenterect herb, glabrous, up to 30 cm tall with creeping long knotty rhizomes. Stem one or two, simple, leafy without top. Leaves alternate, palmate, up to 25 cm in dimeter, deeply divided in 3-5 lobes, toothed, purple spotted.It is a native to Himalayan region(Uttarkashi) in India.Rhizomes are used for typhoid fever, jaundice, dysentery, chronic hepatitis,scofula, rheumatism, skin diseases,tumerous growth, kidney & bladderproblems. Plant is also used forgonorrhoea, and syphilis.The podophyllum is used as a purgative and also for treatment of vaginal warts. Two derivatives of podophyllotoxin, called eloposide and teniposide are employed for treatment of cancers. Root paste is applied on ulcers, cuts and wounds.