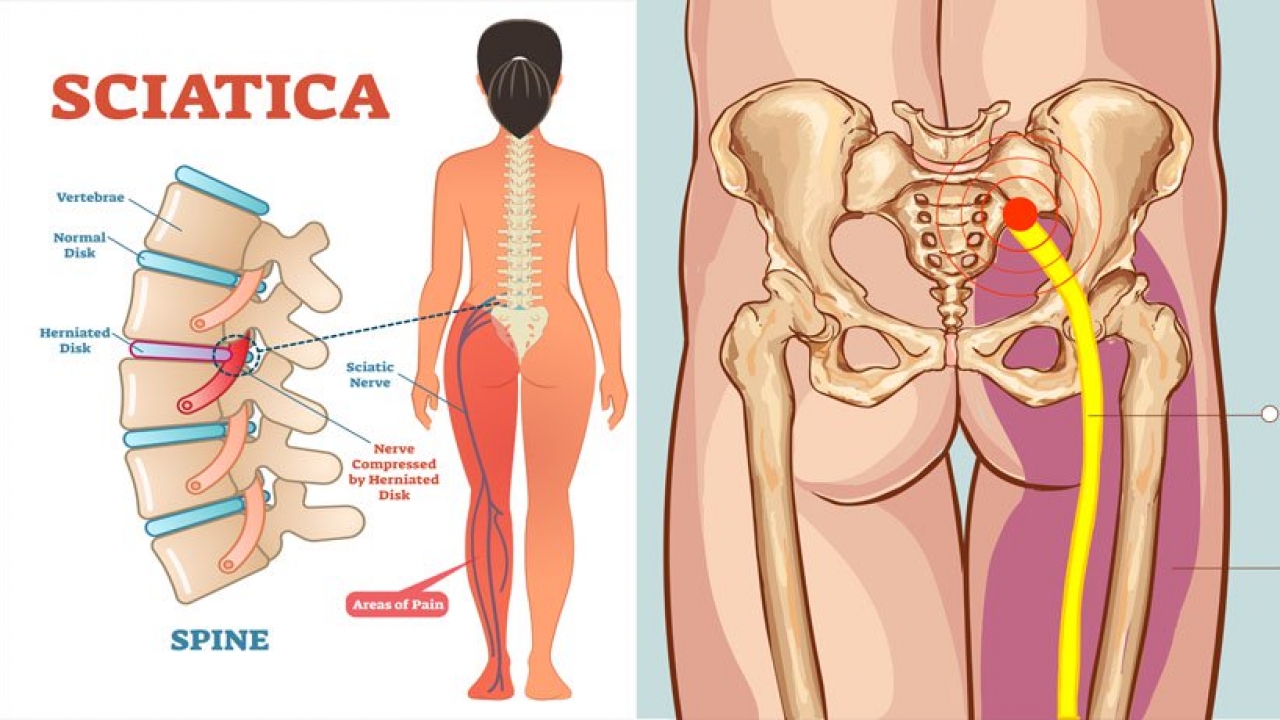 Sciatica is characterized by pain in the lower back that radiates along the path of the Sciatic nerve, which runs from the lower back area through the hips, buttocks and down the back of each leg. It is caused by the irritation or compression of any of the five nerve roots (L4,L5,S1,S2,S3) which form part of the sciatic nerve. Sciatica has become a common problem due to improper sitting postures, long hours of sedentary work and driving for prolonged periods- all common issues in the modern world.
All lower back pain is not necessarily sciatica. A large percentage of back pain originates from muscular problems in the back like over-extension or straining of the muscle. Pain, in the case of sciatica, is characterized by its radiating nature through the leg and to the foot and may get exacerbated by prolonged sitting, coughing or sneezing. Sciatica usually affects only one leg. The symptoms usually appear suddenly, and tend to last for a few days or weeks.
In Ayurveda, a disease known as “Gridrasi” is correlated with Sciatica. The term “Gridhra” in Sanskrit means vulture. Due to the pain, a person’s gait will be altered and will resemble the gait of a vulture.

The most common cause of sciatica is Inter-vertebral disc herniation. Inter-vertebral discs lie between adjacent vertebrae in the vertebral column. These discs allow the vertebrae to move slightly, and hold the vertebrae together while functioning as a shock absorber for the spine. Due to advancing age or trauma, the gel-like core of the disc pushes out through its outer lining and press on the roots of the sciatic nerve.
Narrowing of the spinal canal or spinal stenosis due to advancing age may press the roots of the sciatic nerve and cause pain.
During pregnancy, the developing gravid uterus puts pressure on the sciatic nerve.
Contraction or spasm of a small muscle deep inside the buttocks (Piriformis – muscle) can also cause sciatica. This is commonly seen in women.
Other causes of sciatica include degenerative arthritis of the spine, injury or fracture, muscle inflammation, etc.
In general, any condition which irritates or compresses the sciatic nerve can trigger symptoms.

In Ayurveda, Gridhrasi is included in the diseases caused by the vitiation of Vata Dosha. So the treatment is aimed at controlling the Vata vitiation and removing the obstruction in the path of Vata dosha.
Ayurvedic treatments reduce muscle spasms and strengthen the muscles, which in turn reduces the swelling and prolapse of the disc. Treatments include Snehapana, Potli treatments, bandages with medicinal paste, Kativasthi- which is a special treatment for the spine and different enemas with herbal medicines, among others. Internal medicines are prescribed according to the condition of the patient.
Ayurvedic treatments done under strict medical supervision help to recover from Sciatica and reduce the chances of recurrence of the condition.